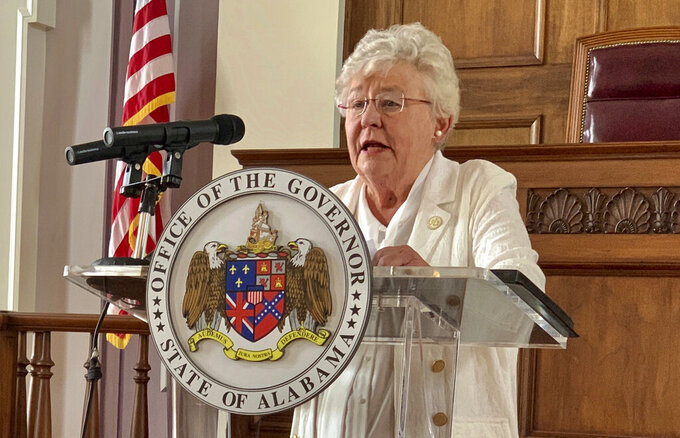 Kim Chandler, ASSOCIATED PRESS
FILE - In this July 29, 2020 file photo, Alabama Gov. Kay Ivey speaks during a news conference in Montgomery, Ala. Alabama lawmakers return to Montgomery on Monday, Sept. 27, 2021, to vote on a $1.3 billion prison construction plan proponents say will help address the state’s longstanding problems in corrections, but critics argue the troubles go much deeper and won’t be remedied with brick, mortar and bars. Alabama Gov. Kay Ivey called a special session next week for lawmakers to vote on the construction plan as well as a sentencing and supervision bill. Ivey said Alabama is risking a federal takeover of the prison system. (AP Photo/Kim Chandler, File)

MONTGOMERY, Ala. (AP) — Alabama Gov. Kay Ivey on Tuesday defended her state’s plan to use pandemic relief funds to build new prisons —saying the $400 million expenditure is both allowed and needed — while a legislative committee swiftly advanced the construction plan.

“The fact is, the American Rescue Plan Act allows these funds to be used for lost revenue and sending a letter in the last hour will not change the way the law is written. These prisons need to be built, and we have crafted a fiscally conservative plan that will cost Alabamians the least amount of money to get to the solution required,” Ivey said.

The $1.3 billion construction plan would tap $400 million of the state’s $2.2 billion share of American Rescue Plan dollars. The House Ways and Means Committee on Tuesday approved the appropriations bill plus a separate bond issue. At least two lawmakers, both Democrats, voted against the use of pandemic funds.

Carla Crowder, executive director of Alabama Appleseed Center for Law & Justice, said during a public hearing that the proposal doesn’t address a staffing crisis or most of the issues identified by the U.S. Department of Justice in its lawsuit and reports against the state.

“Buildings are not killing people,” Crowder said. She said the Justice Department reports are “primarily concerned with unabated violence, homicides, sexual assaults, excessive force by guards and introduction of contraband by staff.”

The Department of Justice last year sued Alabama, saying the state prisons for men are “riddled with prisoner-on-prisoner and guard-on-prisoner violence.”

Rep. Steve Clouse, chairman of the budget committee, said the new prisons would be the base for the changes to the corrections plan.

“It’s just a piece of the puzzle. We feel like it’s a big piece that is building the foundation. There are several different pieces, but we’ve got to get this foundation,” Clouse said. The Ozark Republican said he believed safer facilities will allow the state to better retain staff.

Bennet Wright, executive director of the Alabama Sentencing Commission, estimated that up to 700 inmates might be eligible to request new sentences.

Some lawmakers have argued the state should take on more comprehensive sentencing changes.

“It's incumbent on us to figure out different ways to manage our system, so we can actually reserve space for the people who need it,” said Rep. Chris England, a Tuscaloosa Democrat.