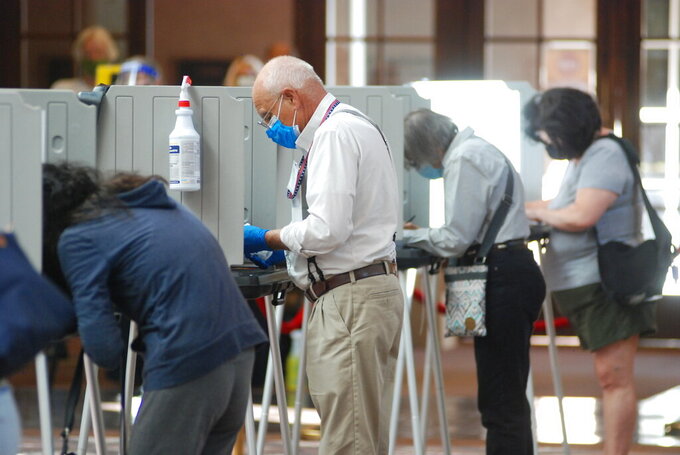 Morgan Lee, ASSOCIATED PRESS
FILE - In this Oct. 6, 2020, file photo, temporary election worker Joseph Banar, center, disinfects voting stations as a precaution against the coronavirus while a steady stream of voters participates in the first day of balloting in New Mexico, at the Santa Fe Convention Center in Santa Fe, N.M. Democrat-backed efforts to expand voter access in New Mexico are coming to fruition, with the rollout of same-day voter registration this month. The first trial run took place in a low-turnout special congressional election June 1, 2021. (AP Photo/Morgan Lee, File)

SANTA FE, N.M. (AP) — Democrat-backed efforts to expand voter access in New Mexico are coming to fruition, with the rollout of same-day voter registration this month.

The first trial run took place in a low-turnout special congressional election on June 1, allowing voters to register at early voting centers in the final weeks of balloting and Election Day.

In all, 2,012 residents took advantage of the opportunity to register during the final four weeks of the election, according to the New Mexico secretary of state's office.

Late-registering voters flocked primarily to the Democratic Party, accounting for about 53% of those registrations — and 50% of registrations on Election Day. About 32% of the later registrations aligned with the Republican Party.

U.S. Rep. Melanie Stansbury, a Democrat, won the June 1 election with 60% of the vote to fill the 1st Congressional District seat held previously by Deb Haaland, now serving as secretary of the U.S. Interior Department.

Same day registration is likely to be an option in future New Mexico elections, but it requires approval every two years by a panel of voting systems regulators. Approval is pending for the November local election to pick mayors in cities including Albuquerque and Santa Fe.

Previously, voter registration was halted 28 days before any election as a precaution against possible double-voting while county clerks updated registration rolls painstakingly by hand with paper and ink, said Mario Jimenez, a policy campaign manager with the progressive good-government group Common Cause New Mexico.

That is no longer necessary with advances in electronic record keeping and technology that synchronizes voter registration records with state motor vehicle databases.

Jimenez believes the switch to same-day registration, if adopted in future elections statewide, will expand voter access and participation in elections and improve the accuracy of voter registration rolls.

The changes were brought on by a 2019 bill, approved on a party-line vote with Republicans in opposition, that opened the door to same-day registration on a delayed timeline.

“Same-day registration is clearly a tool that allows more New Mexicans to participate, and its use would be even wider in a statewide election,” said Alex Curtas, a spokesman for the secretary of state's office.

Future governors could attempt to reverse same-day registration through a vote of the state Voting Systems Certification Committee.

Democrats currently hold all statewide elected offices in New Mexico and majorities in the state House and Senate. The GOP flipped a congressional seat in southern New Mexico in 2020 with the election of U.S. Rep. Yvette Herrell.

Pandemic lockdowns at many of the state's 23 federal recognized Indigenous tribes during the June 2020 primary election triggered the closure or consolidation of some voting sites.

That ensured outside voters would not be turned away, but also made it harder or nearly impossible for some tribal residents to vote.