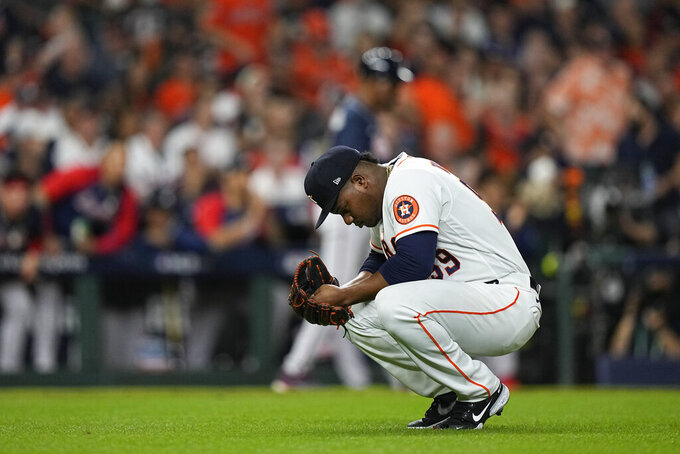 HOUSTON (AP) — Framber Valdez was confident he could rein in his emotions — that starting Game 1 of the World Series wouldn’t big too big for him.

Three pitches in, he was already behind.

Jorge Soler sent that third pitch from Valdez into the seats in left field, and he and the Astros couldn’t recover in a 6-2 loss to the Atlanta Braves on Tuesday night.

“It was my first World Series game, so I’m not going to tell you that I didn’t feel the pressure, I didn’t feel any kind of tension," Framber said in Spanish through a translator. “But I did everything I could to lower that, lower the adrenaline, lower the emotion I was feeling."

Valdez allowed one run in eight sterling innings of a win over the Red Sox in Game 5 of the AL Championship Series, giving the Astros optimism he could help stabilize a rotation rocked by the loss of staff ace Lance McCullers Jr.

Instead, he permitted a playoff career-high five runs while getting just six outs to force Houston to cobble together seven innings with a bullpen that’s carried a heavy load this postseason.

“It’s a shocker, when you come off a great outing like he just did, then the first batter hits it out of the ballpark," manager Dusty Baker said. “So it was kind of a negative from the very beginning."

It was the shortest start in the opening game of a World Series since 2005, when Houston’s Roger Clemens permitted three runs in just two innings of a loss to the Chicago White Sox. Chicago went on to sweep that series in four games.

Valdez allowed eight hits and walked one in his eighth postseason appearance and seventh start. It was the shortest outing of his playoff career, including his relief appearance.

“It was maybe trying to do a bit too much, throwing a bit too hard," he said. “I was in the zone but not exactly where I wanted to be, not where the catcher wanted it either."

Aside from that overpowering Game 5 against Boston, Valdez has struggled this month. He gave up four runs in 4 1/3 innings starting Game 2 of an AL Division Series against the White Sox, then was pulled after 2 2/3 innings and three runs in the opener of the ALCS.

After the homer by Soler, Ozzie Albies singled with one out before swiping second base. An RBI double by Austin Riley came next to make it 2-0 and send pitching coach Brent Strom out to try to calm Valdez.

He retired the next two batters to end the inning but quickly found trouble in the second when Travis d’Arnaud led off with a single. There was one out and runners at second and third when Soler reached and d’Arnaud scored on a fielder’s choice that left Joc Pederson out at third.

Freddie Freeman walked before Valdez thought he’d escaped the inning, but Albies legged out an infield single to load the bases. As first base umpire Tom Hallion motioned that Albies was safe, the emotions that Valdez spoke at length about controlling Monday were written all over his face.

He crouched and shook his head, remaining there for a few seconds staring at the grass and looking stunned. He gathered himself and struck Austin Riley out to end that inning. He pounded his first into his glove triumphantly after that, but his trouble was far from done.

Back out for the third, Eddie Rosario greeted him with a single, and another visit from Strom followed. This chat didn’t help, and Adam Duvall ended his night with a bang when he smacked a liner into the short porch in left field to leave the Braves up 5-0.

“He probably threw a little bit too hard, and it ends up being kind of a nothing fastball," Baker said. “So we had to go get him at that point."

Valdez trudged off the mound as Yimi García trotted in from the bullpen.

The Astros have struggled with inconsistent starters through much of this postseason. Tuesday was the fifth game their starter failed to get out of the third inning.

Valdez was already looking ahead as soon as the game ended and is focused on how he can be better next time he takes the mound.

“We’re going to look at the errors I made and think about how I can clean those things up ... how come I lost focus a little bit there in the first inning, and what I can do to correct those things before the next outing," he said.