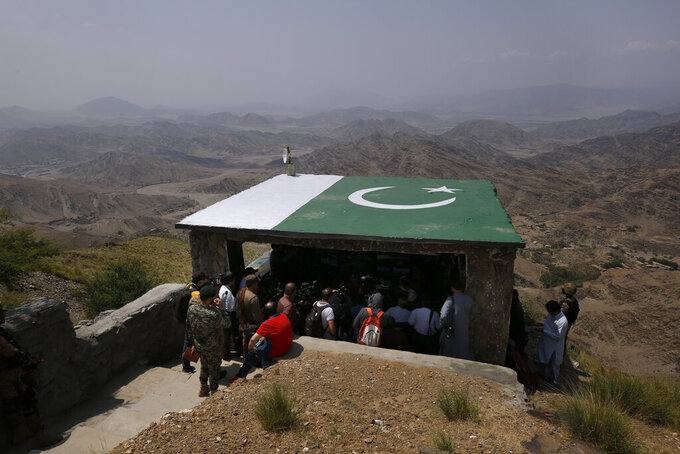 Anjum Naveed, ASSOCIATED PRESS
Members of International media attend a briefing during their visit to a hilltop post on the Pakistan Afghanistan border in Khyber district, Pakistan, Tuesday, Aug. 3, 2021. Pakistan's military said it completed 90 percent of the fencing along the border with Afghanistan, vowing the remaining one of the most difficult tasks of improving the border management will be completed this summer to prevent any cross-border militant attack from both sides. (AP Photo/Anjum Naveed)

TORKHAM, Pakistan (AP) — Pakistan’s military said Tuesday it has completed 90% of a fence being constructed along the border with Afghanistan, vowing to complete the project this summer.

Pakistan says it is constructing the fence to prevent cross-border militant attacks.

The announcement by the Pakistan army comes amid increasing violence in neighboring Afghanistan, where the Taliban have stepped up attacks ahead of a complete withdrawal of American troops from the war-torn country.

Pakistan started the fence along the 2,611-kilometer (1,622-mile) border with Afghanistan — known as the Durand Line — in 2017 when militants repeatedly launched cross-border attacks on Pakistani posts.

On Tuesday, a Pakistani military official, Col. Rizwan Nazir, told a group of foreign journalists at the key Torkham border crossing that the remaining 10% of the fence at the western border will be complete this year.

The border barrier between the two countries consists of two sets of chain-link fences separated by a 2-meter (6.5-foot) space that has been filled with concertina wire coils. The double fence is about 4 meters (13 feet) high. The military has installed surveillance cameras to check any movement along the border.

Afghanistan has never recognized the porous border that runs through the Pashtun heartland, diluting the power of Afghanistan’s largest ethnic group on both sides.

Pakistan and Afghanistan often accuse each other of turning a blind eye to Islamic militants operating along the frontier.

On Tuesday, Pakistani soldiers were seen patrolling one of the most dangerous regions in the county, where Pakistani Taliban and other local and foreign militants have a presence.