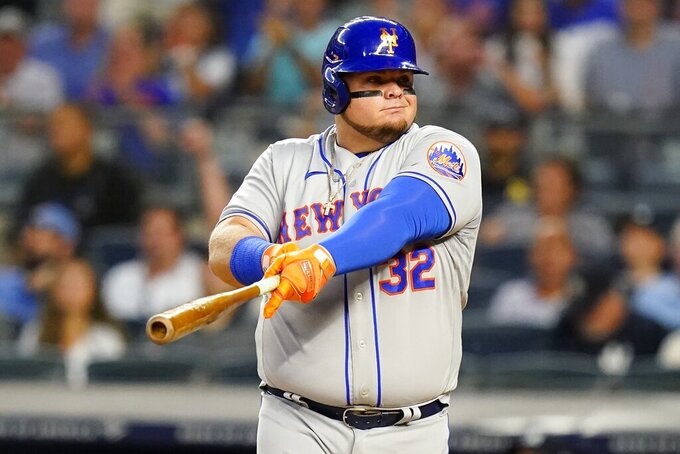 “If anybody wants to turn this into NBA free agency or NFL free agency, I’m all for it,” Eppler said Tuesday at Major League Baseball's general managers' meetings.

Star pitcher Jacob deGrom opted out of his contract to become a free agent and his next step is unclear. Eppler remains in contact with the agent for the two-time NL Cy Young Award winner, Stephen Veltman.

“We had another conversation or a couple of conversations actually leading up to the decision date,” Eppler said. “We just kind of made a pact to stay in touch. ... I think there’s a good deal of interest there on his part, so that was articulated a number of times through the season and reiterated in our most recent conversation."

In the meantime, small steps must suffice. The Mets exercised a $1.5 million option on designated hitter Daniel Vogelbach, preventing him from being eligible for salary arbitration. New York also has hired Eric Jagers as director of pitching development. Jagers had been Cincinnati's assistant pitching coach.

“We've got business to do," Eppler said.

In its second season under new owner Steve Cohen, New York was on track to finish with baseball's highest payroll for the first time since 1989, with spending at $273.9 million as of Aug. 31. Next year's budget has not been set.

Vogelbach, a burly 29-year-old, was acquired from Pittsburgh in late July and quickly became a fan favorite. He hit .255 with six homers and 25 RBIs in 55 games with New York, finishing his season with a .238 average, 18 homers and 59 RBIs overall.

Jagers, 27, worked at Driveline Baseball in Seattle before becoming a Philadelphia Phillies strategist in 2019 and moving to the Reds the following year. Mets pitching coach Jeremy Hefner interviewed all the candidates.

“He’s going to be in charge of all the development feeding into Jeremy,” Eppler said, going on to praise Jagers' "understanding of kind of movement science and the biomechanics that go into pitching, like the efficiency and the kinematic sequence.”

“He's also got a pitch design element to him as well,” Eppler said. “A lot of the players are thirsty for that.”