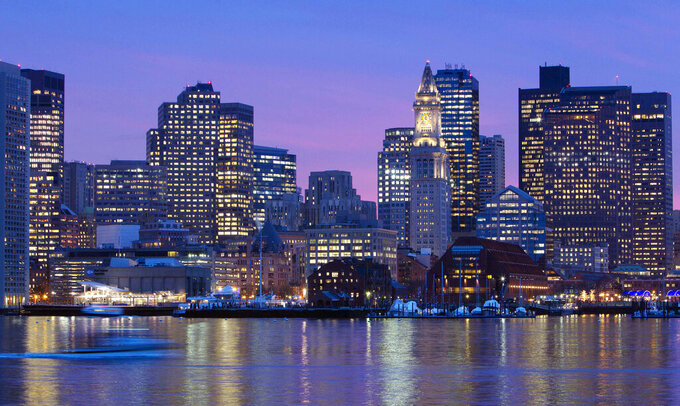 Michael Dwyer, ASSOCIATED PRESS
FILE - The Boston skyline is illuminated and reflected in the waters of Boston Harbor, on Jan. 6, 2012. On Tuesday, Sept. 13, 2022, the city joined the ranks of other major cities challenging their 2020 census figures, claiming the once-a-decade U.S. head count which determines political power and federal funding missed university students, the foreign-born and inmates at correctional facilities. (AP Photo/Michael Dwyer, File)

The city of Boston on Tuesday joined the ranks of other major cities challenging their 2020 census figures, claiming the once-a-decade U.S. head count which determines political power and federal funding missed university students, the foreign-born and inmates at correctional facilities.

Boston Mayor Michelle Wu said the city was challenging the census results through a special program set up by the U.S. Census Bureau for disputes over the numbers of people living in dorms, prisons, nursing homes and other group quarters where unrelated people live together.

People living in group quarters were among the hardest populations to count during the tally of U.S. residents that determines how many congressional seats each state gets as well as how $1.5 billion in federal spending is allocated each year. The pandemic hindered the Census Bureau’s ability to get information about such residents since students on campus were sent home when the pandemic began in the U.S. in March 2020, and prisons and nursing homes went into lockdowns against the spread of the coronavirus.

“Boston deserves an accurate census count across every neighborhood and community,” Wu said in a statement. “This count is the foundation to assess the needs of all of our communities, ensuring that Boston receives crucial federal resources, and it should reflect our full numbers.”

Nothing can be done to change how congressional seats were divided up among the states, nor can the data used to redraw political districts be altered. However, any changes stemming from a review of the group quarters count may be used for future population estimates and surveys that help distribute federal resources.