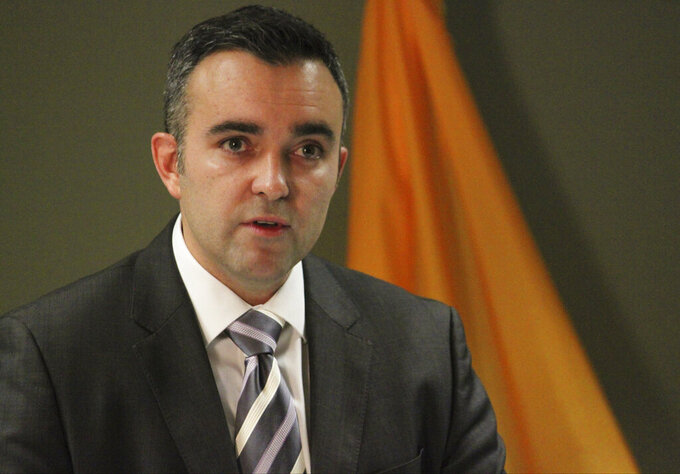 Susan Montoya Bryan, ASSOCIATED PRESS
FILE - In this Dec. 20, 2016 file photo Bernalillo County District Attorney-elect Raul Torrez talks during a news conference in Albuquerque, N.M. Torrez announced on Monday, May 17, 2021, his candidacy to become New Mexico's top public prosecutor. Torrez says he's been an aggressive and innovative prosecutor in the midst of a crime crisis in the Albuquerque area, where homicides are being reported this year at a record pace. State Auditor Brian Colón also is seeking the Democratic nomination. The Republican Party says it's in discussions with possible candidates. Hector Balderas is wrapping up his second term as New Mexico's top prosecutor and consumer advocate. (AP Photo/Susan Montoya Bryan,File)

SANTA FE, N.M. (AP) — The district attorney for New Mexico's largest metro area is seeking the Democratic nomination for state attorney general in the 2022 election, emphasizing his hands-on experience in Albuquerque as the city grapples with stubborn rates of violent crime.

Announcing his candidacy for statewide office Monday, Bernalillo County District Attorney Raúl Torrez said he’s been an aggressive and innovative prosecutor in the midst of a crime crisis in the Albuquerque area, where homicides are being reported this year at a record pace.

The state Republican Party says it is in discussions with potential candidates for attorney general. Republicans have held the office only three times in the state’s nearly 110-year history.

Torrez currently oversees about 115 attorneys at the largest law office in the state. He highlighted initiatives he pioneered to track police misconduct, take on an insurgent local militia and safeguard elections by providing rapid legal advice to police contending with possible political protests and interference at polls.

“New Mexicans are looking for somebody who’s a fighter in the attorney general’s office and someone who has real experience to take on the job,” he told The Associated Press. “If you look at the work that we’ve done inside the district attorney’s office, we’ve been able to secure additional resources, modernize that office, transform how it operates, bringing frankly new capabilities that no one had ever envisioned.”

Last year President Donald Trump dispatched federal agents to Albuquerque while denouncing crime rates in several Democrat-led cities. The Albuquerque Police Department has struggled for years to address allegations of excessive force in policing, under supervision of the U.S. Justice Department through a consent decree.

Torrez said his primary focus as district attorney is in providing resources to combat violent crime.

“It’s undeniable that we’ve got a very serious public safety challenge in Albuquerque,” Torrez said. "Violent crime is unacceptably high, murders are extraordinarily high. But what we need right now are individuals with experience in different systems, and who have worked as as prosecutors and police leaders, who can draw on ideas from around the nation and try and move this community in a new direction. And I think I bring that to the table.”

As a contender for attorney general, Torrez said he wants to expand the state's capacity to handle consumer-rights litigation and address concerns about the reach and influence of technology companies.

“One of the things I’d like to see is the development of a greater and more experienced core of civil litigators” inside the attorney general's office, he said.

On his campaign website, Torrez is highlighting his support for recently enacted state gun safety laws and efforts as district attorney to eliminate a backlog for processing rape-test kits, as well as efforts to publish and analyze demographic trends in policing and prosecution.

Torrez previously served as as a federal prosecutor and senior adviser at the U.S. Justice Department under under Attorney General Eric Holder during Barack Obama's presidency.

Reports of overall crime and property crime in Albuquerque declined in 2020 while the pandemic kept many people at home, as reports of personal and violent crime increased slightly.

Homicides in Albuquerque are setting a record pace this year with 42 reported so far. The deadliest year for homicides was 2019 with 80, and there were 76 in 2020.

As district attorney, Torrez last year filed suit against a self-described civilian militia group known as the New Mexico Civil Guard that he accuses of usurping police authority and acting as an unlawful military unit.

The group's armed members showed up at a demonstration in July 2020 that devolved in a melee as protesters pulled down a statue of Spanish conqueror Juan de Oñate.

Torrez says his office is partnering with a local law firm and the Institute for Constitutional Advocacy and Protection at Georgetown University Law Center to pursue the case.