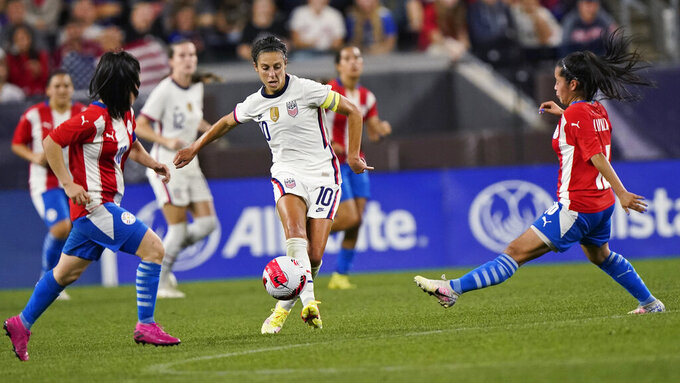 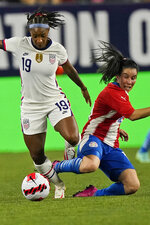 CLEVELAND (AP) — No Carli Lloyd isn't reconsidering her retirement — even after a five-goal game.

Lloyd hit a career high for goals in the U.S. national team's 9-0 rout of Paraguay on Thursday night. The 39-year-old forward has just three more games with the team before she walks away from the game.

“Maybe for a split second,” Lloyd said when asked if performances like that make her want to stick around. “And then I go back to reality.”

Lloyd scored a pair of goals in the opening five minutes, and added her third and fourth before halftime as the United States built a 6-0 lead. She added her final goal in the 61st.

Lloyd has 133 international goals in 313 appearances with the national team. She moved in front of Kristine Lilly for third on the career list.

“She’s an absolute legend, just being on the field, she’s a threat, no matter who we play, when we play, where we play," U.S. coach Vlatko Andonovski said. “Her mentality is something that’s unseen. She’s just hungry for scoring goals, just hungry to get better, and whether we play for a medal or we play Paraguay, it makes no difference. She wants to score goals.”

Lloyd's scoring outburst was reminiscent of the 2015 World Cup final, when she scored three goals in the first 16 minutes against Japan. She announced she plans to retire from soccer after the team's four post-Olympic games.

“That was fun,” she said about the game. “I don't know, I'm just trying to savor it because I want time to go a little bit slower, because one game is down and I have three left.”

It was Lloyd's first career five-goal game. She has nine career hat tricks, one fewer than Mia Hamm.

The five goals matched the U.S. record for a single game, a milestone most recently reached by Alex Morgan against Thailand during the 2019 World Cup. No player has had six.

“I wish I could do it forever, but all good things eventually come to an end and I definitely am for sure retiring,” Lloyd said. “I’m not going to come back out of retirement but you know I’m going to be the biggest cheerleader for this team and really excited to see them continue to keep crushing it."

Andi Sullivan scored 25th before Lynn Williams' blast from distance in the 30th made it 4-0.

Sullivan added a second goal early in the second half, before Lloyd's fifth. Tobin Heath scored the final goal in the 86th.

The United States is in the midst of a four-game post Olympics tour. The Americans won the bronze medal in Tokyo, a somewhat disappointing finish for the defending World Cup champions.

It is the first time that the United States has faced Paraguay, which has never played in the Olympics or the World Cup.

Paraguay lost 7-0 to Japan in April. It was the team's only previous match this year after three scheduled games against Colombia were cancelled because of the coronavirus.

Forward Christen Press was not with the national team because she is taking time off to focus on her mental health. Alyssa Naeher, Julie Ertz, Sam Mewis and Megan Rapinoe were not on the roster because of injury.

The United States plays Paraguay again on Tuesday in Cincinnati. The team is scheduled to host South Korea twice next month before a possible road trip to Australia in November.