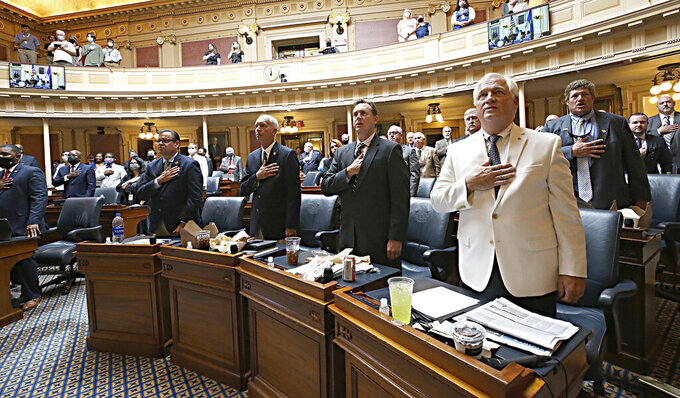 RICHMOND, Va. (AP) — The entire Virginia General Assembly returned to the state Capitol for the first time in over a year Monday, kicking off a short special session to elect judges and adjust the state budget to account for billions of dollars in federal coronavirus relief money.

Some lawmakers wore masks and plexiglass shields were placed between each member of the House and Senate as a precaution against COVID-19, but Monday marked something of a return to business as usual. Legislators had not met indoors and in person since the 2020 regular session ended, with meetings in the meantime taking place virtually or in special event centers because of the pandemic.

“I would like to start with two words: Welcome back,” House Speaker Eileen Filler-Corn told her chamber to applause.

Over the course of about two weeks, legislators will be taking up a wide-ranging budget proposal crafted by Gov. Ralph Northam and fellow Democratic leaders. It calls for spending most of Virginia's $4.3 billion share of American Rescue Plan funding on initiatives such as increasing broadband access, supporting small businesses and tourism, improving air quality in public schools, boosting mental health and substance-abuse treatment, and backfilling the state’s unemployment trust fund.

The proposed budget also contains provisions that would offer some protections against evictions and utility disconnections, and it would help fund state agencies’ ongoing pandemic response efforts. Some funding would remain unallocated for later use.

Republicans, in the minority in both chambers, have complained that they were shut out of the budget-writing process.

“We’re not allowing all Virginians to be heard," Del. Bobby Orrock said in a speech on the House floor.

Del. Luke Torian, chairman of the House Appropriations Committee, shot back that if Republicans wanted to weigh in, they needed only to reach out.

“I have never shut the door," he said.

A meeting of the Senate Finance and Appropriations Committee proceeded with less divisiveness. The panel advanced the budget bill on a bipartisan 14-2 vote.

“There’s a lot of good in this," said Sen. Emmett Hanger, a Republican from Augusta County.

The House Appropriations Committee approved the budget bill a short time later, also on a bipartisan vote, 19-2. The legislation now advances to the respective chambers, where members were expected to debate floor amendments.

Lawmakers will also be filling eight spots on the Court of Appeals this session, after legislation passed earlier this year expanded the intermediate court substantially. Democratic lawmakers involved in narrowing the pool of applicants to a short list had not made the candidates' names public as of Monday.

Sen. Scott Surovell said lawmakers are aiming for a diverse court, both demographically and professionally, with judges who have experience in various areas of the law.

Surovell said a committee hearing will be held once eight finalists have been certified, but no date has been set yet. At that hearing, lawmakers can question the candidates and members of the public will be allowed to testify.

Last year, lawmakers approved a bill to expand the court from 11 to 17 judges. With one vacancy and a second judge announcing his retirement, lawmakers have a total of eight openings to fill.

The three-sided plexiglass enclosures placed between senators caused a bit of a stir, but Republican Sen. Siobhan Dunnavant tried to lighten the mood by handing out colorful butterfly stickers for senators to decorate the shields.

“I was not thrilled about being put in a box, so I decided to make the best of it,” Dunnavant said. “A little silliness, just trying to make fun of this situation a little bit, even though it’s serious.”