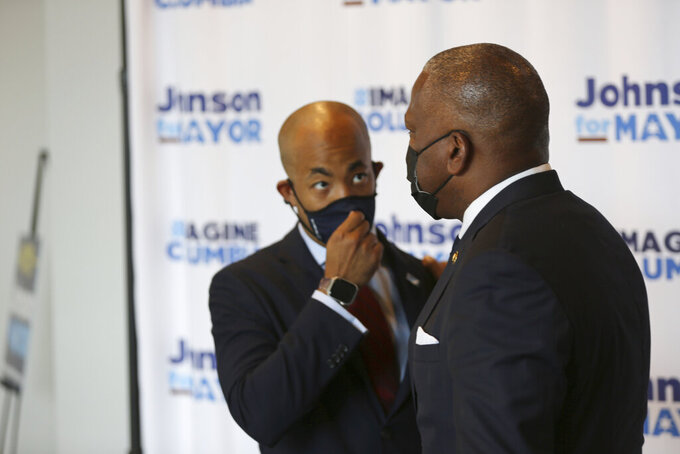 Jeffrey Collins, ASSOCIATED PRESS
Lawyer Sam Johnson, left, talks to Columbia Mayor Steve Benjamin after Benjamin endorsed him to be the next mayor on Wednesday, Sept. 8, 2021, in Columbia, S.C. Benjamin chose Johnson, who was barely out of his teens when they met in 2009, over three current or former Columbia City Council members. (AP Photo/Jeffrey Collins)

COLUMBIA, S.C. (AP) — Outgoing Columbia Mayor Steve Benjamin says the city should next be led by a former aide who was barely out of his teens when he joined Benjamin’s first campaign 12 years ago.

In endorsing lawyer Sam Johnson on Wednesday, Benjamin passed over three current or former City Council members he has worked with for years and considers friends, including the godmother of one his daughters.

Benjamin said he likes Johnson’s bold ideas, including hiring a chief health officer for the city to oversee the COVID-19 response and other issues. The mayor's reasons to support Johnson as his successor sounded a lot like how Benjamin has viewed his 11 years running South Carolina's capital city.

“It’s the new energy. It’s the new ideas. It's a positive view on the future of the city," Benjamin said.

The current mayor said he also was impressed with Johnson's broad support across the political spectrum and that he realizes “sometimes advisories have good ideas.”

Benjamin decided not to seek a fourth term despite wide popularity — both locally and statewide. He won reelection over Baddourah with 64% of the vote in 2013 and was unopposed in 2017. He also gets mentioned as a Democratic candidate for governor or U.S. Senate even though he hasn't given any public indication in what his future plans for public life might be.

Johnson is running on bringing more minority-owned businesses into a city of about 136,000 which is about 40% African-American. He also wants to hire 90 more police officers, raise salaries for officers and firefighters and reduce gun violence.

But Johnson's proposal to hire a chief heath officer has caused the most contention in the race. Devine and Rickenmann have worked against the idea in their roles on City Council and Baddourah is against it. Benjamin supports it.

Just after Benjamin announced his endorsement. Devine posted her own endorsement video on social media from Vi Lyles, the mayor of Charlotte, North Carolina, who grew up in Columbia.

“We need Tameika in Columbia,” Lyles said. “She's going to work hard and do the right thing for all of us.”

Wednesday's endorsement from Benjamin was the latest step in a relationship that has gone on for more than a third of Johnson's life. They first met in a coffee shop in 2009 as Benjamin started to run for mayor.

Johnson, now 33, became an aide for Benjamin after his election before leaving the mayor's office to go to law school.

Benjamin said he met Johnson for coffee three times while trying to decide who to hire for his campaign.

“After the third meeting, Sam decided he was going to hire himself," Benjamin said. "It was an early indication on his tenacity, focus, dedication to task and love for the city of Columbia.”