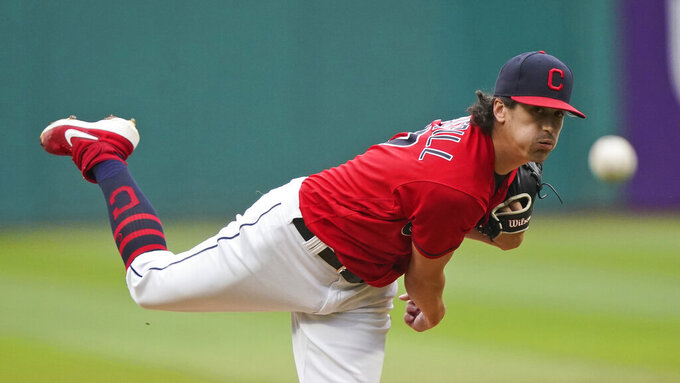 Cabrera went 2 for 4 and scored twice in raising his hit total to 2,919, 10 shy of matching Al Simmons for 40th place in baseball history. He broke a tie with Lou Gehrig and Fred McGriff on the homer list with a solo shot off Nick Wittgren in the fifth inning.

“Miggy is happy when he’s hitting -- and a happy Miggy is a good Miggy,” Tigers manager A.J. Hinch said. “It was a good day for a lot of guys and everybody found a way to contribute.”

Wily Peralta (1-1), who didn’t pitch in the majors last year, allowed one unearned run over five innings for his first win since April 17, 2019, with Kansas City. The right-hander struck out a season-high five without issuing a walk in his second start in five days.

“It’s been a while between wins, but I felt really good,” said Peralta, whose last victory as a starter occurred four years ago with Milwaukee. “We have a really hungry, young group and I think that translates to the field, and it’s an honor to play with a future Hall of Famer in Miguel.”

Derek Hill had a two-run single and Eric Haase homered and scored three runs for Detroit, which finished June with a 14-13 record for its second consecutive winning month. Jonathan Schoop and Zack Short had two hits apiece.

Indians starter Logan Allen (1-5) gave up three runs in 3 2/3 innings, losing his fourth in a row. Bradley Zimmer tripled home Ernie Clement in the second to avoid the shutout.

“Logan made some mistakes and the last pitch to Haase was probably not a really good pitch,” Cleveland manager Terry Francona said. “I thought he made some good pitches, but I don’t know if he repeated them all the time.”

In the first game, Harold Castro and Schoop each had three RBIs as the Tigers scored the final five runs in a 9-4 victory. Rookie Bobby Bradley belted two of Cleveland’s four homers off José Urena.

Indians third baseman José Ramírez did not play in the nightcap after fouling a Kyle Funkhouser pitch off his left cheek in the opener. Ramírez returned to the dugout early in the second game after a quick trip to the hospital.

“José got checked out and they said he was fine, which we thought was the case,” Francona said. “We were actually going to let him (pinch-hit) in the fourth if we extended the inning. The kid’s unbelievable, man.”

Detroit banged out 24 hits on the day and received 5 2/3 scoreless innings from its bullpen. The Tigers improved to 25-73 against Cleveland since 2016.

“It’s always good to throw up zeroes as a bullpen, and hat’s off to our guys for coming out and getting it done,” Funkhouser said.

The start of the first game was delayed by 2 hours, 29 minutes because of intermittent rain, pushing the doubleheader to an evening start. The AL Central foes were rained out Tuesday.

Indians ace Shane Bieber (right shoulder soreness) has not been cleared to resume throwing, but manager Terry Francona said the team’s medical staff was “really pleased” with the progress of the 2020 AL Cy Young winner.

Bieber, who is 7-4 with a 3.28 ERA in 14 starts, was placed on the injured list for the first time in his career following his June 13 start against Seattle.

Cleveland outfielder Josh Naylor will undergo surgery Friday to repair multiple fibula fractures and torn ligaments in his right ankle. He suffered the season-ending injury in a horrific collision with second baseman Ernie Clement at Minnesota on Sunday.

Tigers: RHP Michael Fulmer (neck strain), who was placed on the injured list Sunday, is undergoing soft tissue treatment on his neck and upper right trapezius. He will be evaluated Friday.

Indians: C Roberto Pérez (right ring finger fracture) was struck on his right hand in the second game of his rehab assignment with Double-A Akron, but Francona said he was not hurt by the pitch.