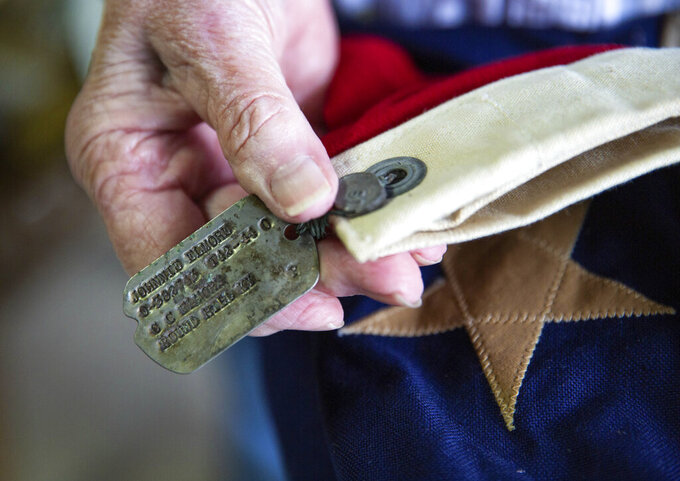 Grace Ramey, ASSOCIATED PRESS
Velda Alexander of Bowling Green, Ky., holds the dog tags of her father U.S. Army 2nd Lt. Johnnie Elmore which are tied to a folded American flag while going through the contents of his military footlocker trunk in her garage on Wednesday, Sept. 15, 2021, after she and her family found the trunk in her grandmother's old country store in Round Hill last week after it had been missing for nearly 77 years. Elmore, who graduated ROTC at Western Kentucky University in 1941, was killed in action in December 1944 at the age of 31 while based in France and England during World War II. The trunk contains a World War II uniform, a folded American flag, a Purple Heart and other medals and patches, dog tags, love letters to his soon-to-be wife Irene Martin, diaries and more. (Grace Ramey/Bowling Green Daily News via AP)/Daily News via AP)/Daily News via AP)

BOWLING GREEN, Ky. (AP) — Velda Alexander never met her father, Johnnie Elmore, who was killed in action during World War II. But a recent discovery finally connected her with the hero she always wanted to meet.

Elmore received the Purple Heart after he sacrificed his life for his country in December 1944. Alexander was just 11 months old, so she had no memories of her father.

After he passed away, his belongings from the war were all put in a trunk for safekeeping.

The possessions included dozens of letters he wrote to his loved ones, his uniform, portraits of himself, personal diaries and his Army dog tags attached to an American flag.

Alexander’s grandmother told her she had given the trunk away when Alexander was little, and it had been missing for 77 years.

But Elmore’s foot locker was recently found in the back of a country store formerly owned by Alexander’s grandmother in Roundhill in Butler County.

“I really enjoyed going through it,” Alexander said. “I remember seeing it when I was younger, but I hadn’t thought about it in years. When they opened it up, I was just amazed the letters were there and as legible as they are. They are in perfect condition.”

The Bowling Green resident is making her way through the pile of memories he left behind.

While there isn’t a way for her to truly get to know her father, she said the letters have helped paint a clearer picture of who he was. He even wrote about Alexander specifically and gave her the nickname “Froggy.”

“I see a lot of me in there,” she said looking through the pile of messages. “There was one letter in there where he wrote to my mother, ‘I didn’t have any place to keep these letters, so I’ll send them home. Maybe one day when Froggy is older, she will get to read them.’ It was just like it was meant for me to read them someday.”

Elmore graduated from Western Kentucky University, where he was a member of the ROTC. He later taught ROTC at Indiana University in Bloomington. He was 31 years old when he was killed in action.

The Army’s death telegram, along with his Purple Heart, were among the items in the trunk. Elmore’s body was eventually brought back to the U.S. to Alexander’s mother, Irene Martin. He is now buried in a Butler County cemetery.

“It’s really a treasure chest,” Alexander said of the trunk. “My half sister was more emotional with it than I am. She just cried a lot. This is one reason why I still have it out. My son hasn’t seen it, and he will be doing so soon. Of course, my mother is gone so I don’t know how she would be with me reading all of her old love letters.”

Thanks to stories passed down through the family, relative Joy Mahaney described Elmore as a gentlemen who was very kind and loved his country dearly.

“This would be a wonderful Hallmark movie, wouldn’t it?” Mahaney said of the trunk being found. “He loved his family. ... We are so happy to have found this.”

In one letter, Elmore had sent back a $2 bill for Alexander. It’s still in perfect condition. She read it aloud for a Daily News reporter:

“Here is something for a good little girl since you are eight months old today. They say $2 bills are good luck. With much love from your daddy — Johnnie.”