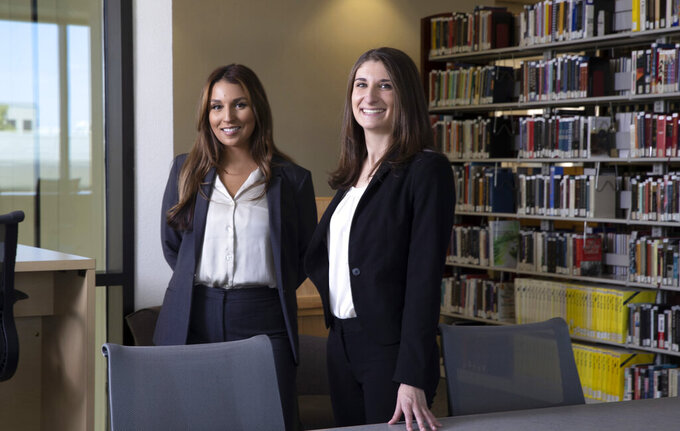 Days of preparation amounted to just a one-minute introduction — and, just like that, their first semester at the University of Nevada, Las Vegas Misdemeanor Clinic commenced.

“It seems very small in the grand scheme of the courts, but for the people who are kind of going through the misdemeanor issues, it’s very, very difficult, and it’s very serious, and it’s very impactful once they get proper representation,” Özdemir said. “So I was very excited to jump in.”

The clinic at the UNLV William S. Boyd School of Law connects law students with defendants facing misdemeanor charges or traffic offenses and who do not qualify for public defenders.

The clinic, with six students this semester, is co-directed by professors Eve Hanan and Anne Traum, who said students apply for the work and receive credit for six academic units upon completion.

“They just take it really seriously like a job, and they work a lot of hours,” Traum said. “It is for-credit but feels like a job because of the time, but also because it’s a higher level of responsibility than they would have experienced at almost any other job during law school before they get to the clinic.”

The units are equivalent to about half a semester’s worth of classes. But Özdemir said the effort felt less like a requirement than a necessity.

“The course load honestly feels less demanding to me because we’re doing such tangible work that actually helps people,” she said.

Nevada Supreme Court Rule 49.3 allows students such as Özdemir and Bacher to practice law under the supervision of an attorney licensed in Nevada.

As long as they have completed 45 semester credit hours, they can attend hearings, counsel clients and draft legal documents, Hanan said.

Following passage in June of Assembly Bill 116 — which will decriminalize minor traffic offenses starting Jan. 1, 2023 — the students’ work is more imperative than ever, Hanan said.

“Part of our projects right now is to determine which courts are changing their procedures now or soon, in anticipation of that change in 2023, and which courts are continuing with business as usual,” she said.

Most convictions that occur in the United States are for misdemeanors, and a Loyola Law School study discovered that white misdemeanor defendants were 46% more likely to have their charges cleared compared with Black defendants.

The Mob Museum, officially the National Museum of Organized Crime and Law Enforcement, hosted an Aug. 2 screening of the documentary “Racially Charged: America’s Misdemeanor Problem,” which Bacher and Özdemir said they watched with other students at the clinic.

Leisa Moseley, Nevada state director of the Fines and Fees Justice Center, is entrenched in the reform of the misdemeanor system both through work and personal experience. She said she received a traffic ticket for an expired registration and spent a day in jail. Educating those unfamiliar with the impact of a misdemeanor conviction is key to making lasting change.

“The biggest obstacle is information,” Moseley said. “We tend to think misdemeanors are just minor crimes and that they’re something that can be taken lightly, when in fact they are a system that just gets people caught up in a cycle of poverty.”

Before law school, Bacher said she did not know the negative effects of a misdemeanor.

Yvette Williams, founder and chair of the Clark County Black Caucus, said AB 116 was a strong step forward for the state. However, she said she thought that before the effective date in 2023 judges should halt prosecution of the minor traffic offenses the new law will eventually cover.

On Sept. 23, the Clark County Black Caucus will host a community discussion regarding an additional aspect of the misdemeanor problem — additional fines and fees tacked onto charges.

“We are going to do some other previews with folks that are in decision-making positions and also within the community to continue to educate and inform,” she said.

Özdemir said she was proud of her work at the clinic, especially as a Las Vegas local who grew up and attended all her pre-college, undergraduate and graduate schooling in the city.

“I didn’t really understand, when I got into law school, just how burdensome it can be,” she said. “It’s a little scary. We hope that the judges have (AB 116) in the back of their mind, and we hope that they’re aware of why this was needed.”