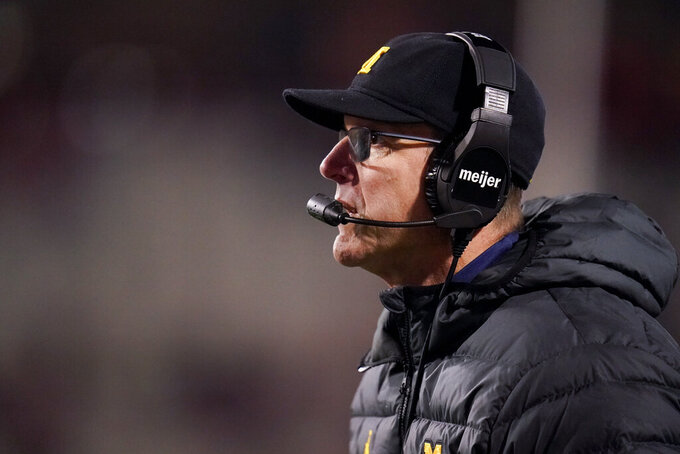 Things to watch during Week 13 of play in the Big Ten Conference:

The stakes are as they should be for a late November showdown between top-10 teams: winner goes to the Big Ten championship game in Indianapolis next week and is the conference's front-runner for a spot in the College Football Playoff. The Buckeyes (10-1, 8-0, No. 2 CFP) are on a higher level offensively than the rest of the nation right now. The Wolverines (10-1, 7-1, No. 5 CFP) and Jim Harbaugh are desperate to beat Ohio State for the first time since 2011.

Michigan State offense vs. Penn State defense. The 12th-ranked Spartans (9-2, 6-2) are still smarting after their worst offensive performance of the year in a 56-7 loss to Ohio State. Kenneth Walker III has been bothered by a sore left ankle and is among several Spartans who are banged up. The Nittany Lions (7-4, 4-4) have given up more than 21 points just three times and are coming off a shutout of Rutgers.

Minnesota is a 6 1/2-point underdog at home against Wisconsin on Saturday, according to FanDuel Sportsbook.

You never know which version of the Gophers (7-4, 5-3) will show up week to week, but the Battle for Paul Bunyan's Axe should provide plenty of motivation. The No. 18 Badgers (8-3, 6-2) go to the Big Ten championship game as West champion with a win. If they lose, they still go to the title game if Nebraska upsets Iowa on Friday.