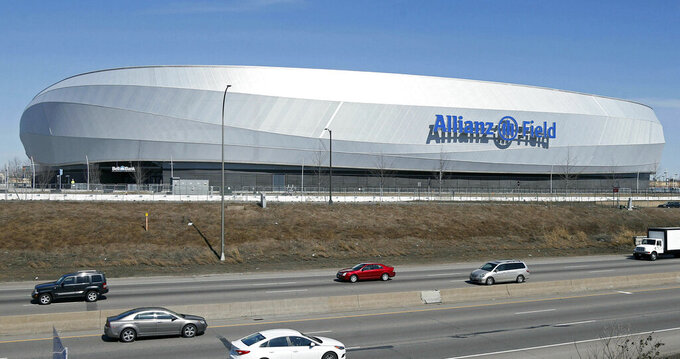 Jim Mone, ASSOCIATED PRESS
FILE - This is a March 26, 2019, file photo showing Allianz Field in St. Psul, Minn. Major League Soccer has awarded the 2022 All-Star game to Minnesota, where Allianz Field serves as one of the league's best successes as the home of Minnesota United since 2019. (AP Photo/Jim Mone, FIle)

ST. PAUL, Minn. (AP) — The MLS All-Star Game will have another first-time host next season.

Major League Soccer Commissioner Don Garber announced the award of the summer showcase Tuesday at a ceremony at Allianz Field, where the MLS All-Stars will face a to-be-determined opponent on Wednesday, Aug. 10. The 19,600-seat, soccer-specific home of Minnesota United opened in 2019.

“It is a game that they’ve earned, as opposed to one that they expected,” Garber said.

Minnesota United coach Adrian Heath will lead the MLS All-Star team. The Loons, who joined MLS in 2017, made the playoffs in 2019 and 2020, when they reached the Western Conference final. They are currently in seventh place, in the final postseason spot.

Allianz Field hosted two CONCACAF Gold Cup group stage matches in its inaugural year, plus an international friendly for the U.S. women’s national team. The U.S. women will play another exhibition there this month.

The privately funded $250 million stadium with translucent mesh-like skin and a curvy, 360-degree canopy above open-air seats has brightened the worn-down Midway neighborhood in Minnesota's capital. Playing roughly halfway between the downtowns of twin cities Minneapolis and St. Paul, the Loons have competed in front of capacity crowds this season, unlike last year because of the pandemic.

Seven franchises have either joined MLS or been awarded a spot since Minnesota United entered, and team owner Bill McGuire has been a valuable advice giver for several of his expansion peers.

“It’s very empowering to all of us at the league to see the progress that they’ve made here,” Garber said. “They executed on expansion very, very well.”

The heart of the fan base is in the safe-standing supporters section called the “Wonderwall” — an ode to the '90s hit by British pop band Oasis that serves as the team's victory song — hovering steeply above the pitch in a pyramid shape behind the south goal.

The All-Star game this season — the league's 25th — was held in Los Angeles at Banc of California Stadium, home of LAFC. The MLS side beat the Liga MX squad in a shootout after a 1-1 draw in regulation, the first such matchup of stars from Mexico's top league against the standouts from the U.S.- and Canada-based MLS.

Garber raved about the level of competitiveness and said there will be more MLS-Liga MX matchups at the All-Star game, but the 2022 format remains under consideration. The undercard includes several community events and a player skills challenge.

Before the pandemic, the MLS All-Stars since 2005 had faced a top European team in the midsummer exhibition, from Manchester United to Bayern Munich.