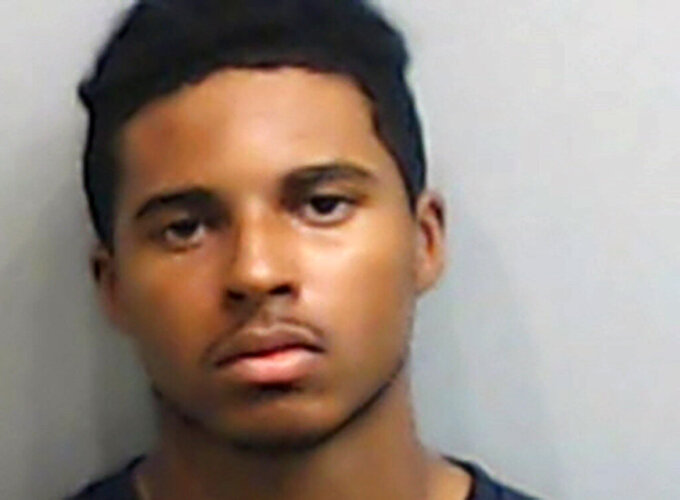 Uncredited, ASSOCIATED PRESS
FILE - This undated file photo provided by the Fulton County Sheriff's Office shows Julian Conley. Two men who have been charged in connection with the 2020 shooting death of an 8-year-old girl in Atlanta, Conley and Jerrion McKinney, pleaded not guilty on Tuesday, Sept. 7, 2021. (Fulton County Sheriff's Office via AP)

ATLANTA (AP) — Two men who have been charged in connection with the shooting death last year of an 8-year-old girl in Atlanta pleaded not guilty on Tuesday.

Secoriea Turner was killed July 4, 2020, while riding in an SUV with her mother and her mother’s friend near the Wendy’s restaurant where Rayshard Brooks, a 27-year-old Black man, had been killed by a white police officer just weeks earlier.

Both men are being held without bond in the Fulton County jail and appeared via video conference before Fulton County Superior Court Judge Kelly Lee Ellerbe, news outlets reported. They each pleaded not guilty to the charges against them.

The fast food restaurant was set on fire the day after Brooks’ killing, and people protesting police brutality camped out at the site during the weeks that followed. Fulton County District Attorney Fani Willis has said that makeshift barricades set up in the area were manned by members of the Bloods gang who were protesting the killing of Brooks. Willis said Brooks also was a member of the gang, but lawyers for his family have said they had no knowledge of such an affiliation.

Authorities said the armed men were turning some drivers away. As the driver of the SUV Secoriea was riding in approached the barricade, armed people began walking toward the vehicle and signaling that the driver couldn’t pass, according to officials.

When the SUV didn't stop, Conley fired into the car, resulting in Secoriea's death, Willis said last month when she announced the indictment.

Willis said both men are accused of manning the barricade and encouraging the commission of various crimes as part of their participation in the Bloods, including aiming a gun at at least two other people in a car the same day Secoriea was killed.

The girl's parents, Charmaine Turner and Secoriey Williamson, filed a lawsuit in June against the city and city officials. It says city leaders showed negligence in failing to remove armed vigilantes who gathered at the site along with peaceful protesters, creating a dangerous situation that led to the girl’s death.