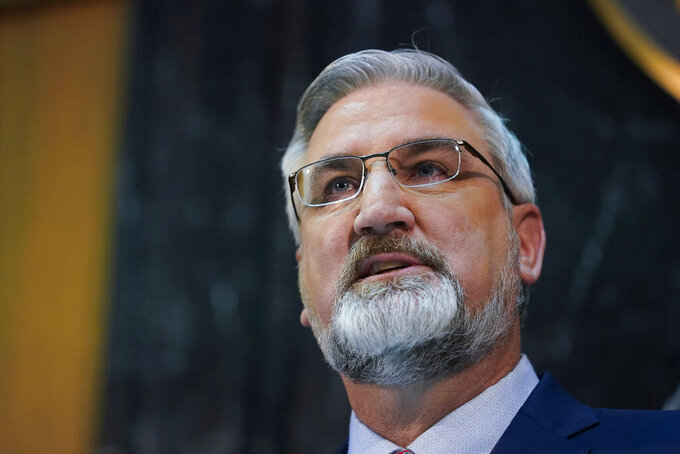 Darron Cummings, ASSOCIATED PRESS
FILE - Indiana Gov. Eric Holcomb delivers his State of the State address to a joint session of the legislature at the Statehouse on Jan. 11, 2022, in Indianapolis. Holcomb said Friday, Nov. 11, 2022, while at the U.N. climate conference in Egypt, that he’s talked with corporate and foreign government leaders about renewable energy investment being made in Indiana by the state and businesses. (AP Photo/Darron Cummings, File)

INDIANAPOLIS (AP) — Indiana Gov. Eric Holcomb said Friday he has been focused on business while spending this week at the U.N. climate conference in Egypt.

The Republican governor said that he has talked with corporate and foreign government leaders about the renewable energy investments being made in Indiana by the state and businesses — even amid skepticism among fellow Republicans in the state Legislature over such steps.

Holcomb told Indiana reporters via video conference that it was important to position the state so it can receive a share of the business investments following the COVID-19 pandemic.

“There are so many big decisions being made about reshoring, onshoring and building supply chains and clusters and ecosystems and making sure that you’re eliminating all the supply chain pain and have just-in-case access to the products that you need to meet the consumer demand,” Holcomb said.

Holcomb led an Indiana delegation that arrived Sunday in Egypt and is scheduled to return to the state on Saturday.

President Joe Biden spoke Friday at the annual global conference on climate change, known at COP27, that was drawing leaders from nearly 200 nations to the Egyptian resort town of Sharm el-Sheikh. It wasn’t immediately clear Friday how many other U.S. governors were attending the conference, although New Mexico Gov. Michelle Lujan Grisham and Washington Gov. Jay Inslee, both Democrats, have announced they would travel to Egypt for the summit’s second week.

Several of the Republicans who dominate Indiana’s Legislature have been skeptical of the shift toward renewal energy sources such as solar and wind power as utility companies have moved toward shutting down some coal-powered electricity plants in the state. Those critics raise concerns about renewable sources providing reliable electricity and rising power costs.

Sam Carpenter, executive director of the Hoosier Environmental Council advocacy group, said he was thrilled that Holcomb traveled to the U.N. conference and recognized the economic opportunities available with shifting toward renewable energy sources.

Holcomb traveled to northern Indiana last week for an event marking the second phase of an Israeli-owned company’s planned $1.5 billion solar farm in parts of Starke and Pulaski counties.

Holcomb said Indiana must be flexible as it is “competing against the world” for business investment.

Holcomb’s time at the climate conference was his sixth foreign trip this year, including to Germany and Switzerland last month and to the World Economic Forum in Davos, Switzerland, in May.

Holcomb also traveled in August to Taiwan amid high tensions between China and the U.S. after House Speaker Nancy Pelosi visited earlier that month. He flew to Israel last year in a show of support for the country after an 11-day war between Israel and Gaza’s militant Hamas rulers.