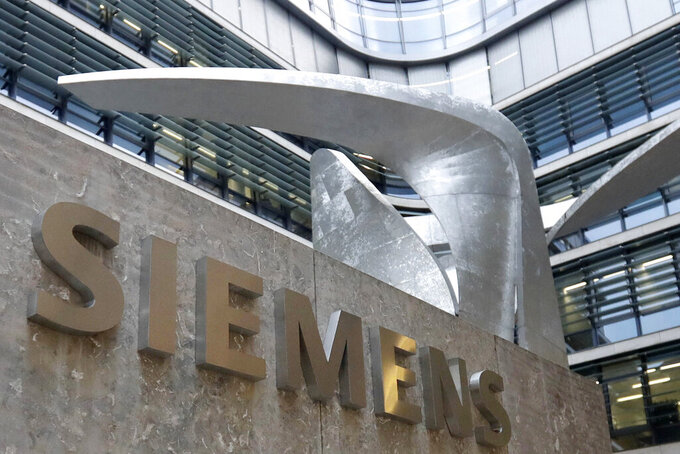 Matthias Schrader, ASSOCIATED PRESS
FILE - This Thursday, Nov. 9, 2017 file photo shows the logo of German industrial conglomerate Siemens in front of their headquarters in Munich, Germany. Siemens ignored some of its own red flags for foreign bribery in the aftermath of a major corruption scandal in 2008, according to reports released in 2021 by an independent monitor and other confidential documents. (AP Photo/Matthias Schrader, File)

German engineering giant Siemens ignored some of its own red flags for foreign bribery in the aftermath of a major corruption scandal in 2008, according to newly released reports by an independent monitor and other confidential documents.

The warnings involved the company’s use of third-party resellers, who have often served as conduits for bribing foreign officials, according to former company insiders and company internal assessments. Evidence from public records in China suggests that problems with resellers have continued during the pandemic, and resulted in the sale of medical equipment to Chinese state-owned hospitals at vastly inflated prices.

The monitoring reports, which Siemens was obliged to commission from 2009 to 2012, stem from a $1.6 billion landmark settlement of bribery charges by the US Department of Justice (DOJ) and the Securities and Exchange Commission (SEC) in 2008. During their investigation, US and German authorities found over $1 billion of bribes paid to foreign government officials in return for business, in what the SEC called a “systematic practice” spanning decades and virtually every region in which Siemens operated, violating the Foreign Corrupt Practices Act (FCPA). Siemens admitted to failures of internal controls and record-keeping.

This story was provided to the Associated Press by 100Reporters, a nonprofit news organization based in Washington, D.C.

The nonprofit news organization 100Reporters, represented by the law firm Davis Wright Tremaine, sued the Justice Department for the release of the monitoring reports under the Freedom of Information Act. The DOJ, Siemens, and its independent monitor, former German Finance Minister Theo Waigel, all fought to keep the contents of the monitoring reports secret, and despite the court-ordered release, much of the material remains cloaked behind heavy redactions

Waigel declined comment, saying he did not remember details of his monitorship. Nevertheless, Waigel has since gained a reputation in Germany as a compliance troubleshooter for major international corporations, partly as a result of his oversight at Siemens.

In a statement, Siemens said that the company has “an extensive global compliance program designed to prevent, identify, and eliminate corruption,” and that it was “making extensive efforts to identify and eliminate business practices that promote corruption (in China). This includes ending the use of sales partners and consultants in the event of misconduct.”

The appointment of Waigel, a highly-regarded figure in German government and business circles, reflected the importance of Siemens’ reputation and worldwide business to Germany’s political establishment.

Evidence from one lucrative sector, the sale of healthcare equipment in China, suggests that even during the four years of Waigel’s monitorship and the rebuilding of the company’s reputation, Siemens was intentionally relaxing rules where it could.

In his initial report, Waigel made 114 recommendations for changes in Siemens’ compliance practices to prevent bribery. The court permitted the Justice Department to redact all of those recommendations in the current release, but a former Siemens employee, Meng-Lin Liu, disclosed one key issue: a review of the company’s internal controls for scrutinizing business partners, particularly the use of resellers or distributors in contracts that would otherwise be handled directly between Siemens and the purchaser.

The alleged bribery by third-party resellers to advance Siemens’ business interests represented a main plank of the SEC’s criminal complaint against Siemens in 2008, and a problem that would continue to dog Siemens, prompting subsequent investigations in Brazil and China. The problem was not unique to Siemens. According to a 2014 briefing by the law firm Clifford Chance, over 90 percent of all FCPA prosecutions in China involve such third-party agents.

Waigel raised the same point in an October 2011 monitoring report, alerting Siemens to the risk that resellers carry with respect to “relationships with current and former government officials.” He added, “An organization should take steps to monitor its third-party relationships continuously for corruption red flags and terminate relationships that expose the organization to liability.”

A 34-page “Special Review,” of the company’s system for scrutiny of potential partners completed in January 2010, called the Business Partner Tool (BPT), showed that in November 2009, Siemens assembled a team to examine how the company vetted these third parties, referred to as import/export companies in the documents.

When the team interviewed Liu that December, Liu said that he expressed concern that Siemens was allowing some business partners to sidestep vetting through the BPT, thus allowing what were, according to Siemens’s own definition, “high-risk” entities to conduct the company’s business in China without proper due diligence. It appeared that the review team listened to Liu. The review stated that a 2008 decision to “exclude (import/export companies) related to sales and tendering business from the BPT approval” should be reexamined.

The team even noted other red flags that should, in its view, intensify scrutiny of import/export companies. One such red flag was the fact that Chinese hospitals chose a “partner of trust” from which to buy equipment and assigned that partner of trust to a respective Siemens unit. A second flag was that some import/export companies used by bigger hospitals were actually former purchasing departments of those hospitals.

In an emailed statement, Siemens did not directly address this review, but insisted that its compliance system was “adequately conceived,” and pointed to Waigel’s positive appraisal of the company at the end of his monitorship.

Otto Geiss, a former compliance officer at various German companies and board member at the European Business Ethics Network Germany (DNWE), said the company was turning a blind eye to a dubious system.

“Of course, if the hospital has an influence on who imports the product I would say right away that kickback payments are being paid,” Geiss said. “What interest could a hospital possibly have in whether Mr. X or Mr. Y. is doing the importing? That means they have an influence on who gets the business.”

Moreover, five months later, a memorandum issued by Siemens’ compliance officers reinforced the 2008 decision to ignore such warning signs. The June 2010 memo, sent to Liu among others, declared that three of the four different ways that Siemens works with import/export companies in China could be exempt from this heightened scrutiny.

“Why would I figure out a methodology for red flags and then not apply it?” Geiss asked. He noted that Siemens was widely praised for developing its IT-based Business Partner Tool to help weed out corruption as part of the comprehensive compliance infrastructure it built after the 2008 scandal. “Why would I make a rule, then define all the exceptions, then say, only the exceptions apply?” he asked.

In other words, the memo expressly acknowledged the risk of bribery, but neither addressed how to prevent it nor how to remedy it if it occurred.

Siemens fired Liu in 2010, after he drew attention to the due diligence failures. A Siemens spokesman said that Liu left the company by “mutual termination agreement,” while Klaus Moosmayer, Siemens’ then-Chief Compliance Officer, said at the time that Liu was terminated following “performance issues.”

In November 2010, after Liu learned of his firing, he emailed Waigel and the company’s compliance department, detailing what he said were many compliance failures.

How Waigel dealt with Liu’s concerns in his monitoring reports, or even whether he read Liu’s email, is unknown, thanks to the secrecy he and Siemens insisted upon in fighting against their public release. Nevertheless, Waigel’s second-year workplan reported that “Siemens . . . is working to implement all 114 recommendations (from his initial report) in a timely manner.” In October 2011, after three years of assessing Siemens’ compliance policy and procedures, Waigel concluded that the German company had “fully implemented all of his Year One recommendations”.

To the letter, Waigel was correct. The monitor had recommended a “review” of the company’s practices involving resellers, which Siemens had indeed conducted. However, the spirit and intent behind the recommendation–rooting out practices conducive to bribery–appear to have been largely sidestepped in favor of a more passive approach, of reacting only after corrupt actors had been identified by external parties - such as the Chinese courts.

In the face of Siemens’ apparent inaction, the problem persisted. According to a recently-released Chinese court verdict, in that same year that Waigel gave Siemens a clean bill-of-health, a Siemens business manager offered to pay a hospital president in the Anhui district 2 million renminbi ($300,000) to ensure that Siemens products won bids. The hospital president who made this confession was convicted of taking bribes from 2004 to 2017.

Two years after Waigel’s monitorship of Siemens ended, the most senior sales manager at Siemens China, like Liu before him, blew the whistle on corruption among third-party resellers. In a 2013 email to dozens of senior staff at Siemens China, the manager, Cao Yong Sheng, pointed to a “huge gap between biddings and contracts,” and asked, “Where’s the gap going?”

Sheng, sacked over his own alleged corruption, maintained that Siemens knew full well that intermediaries were overcharging for equipment, building in the cost of bribes to hospital officials. “It made us very uncomfortable and so worried,” he wrote.