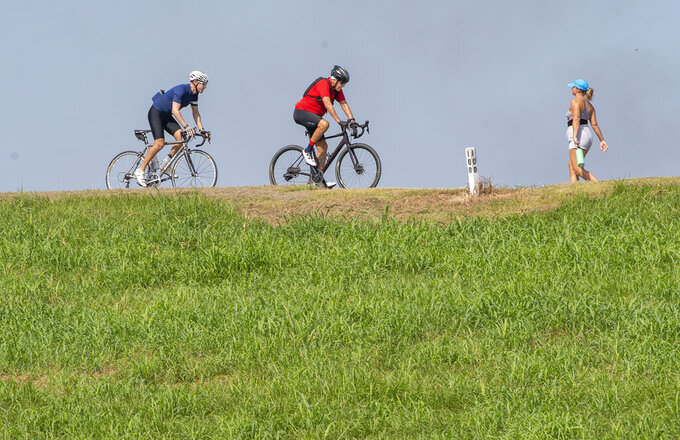 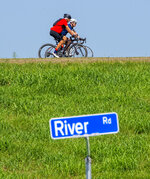 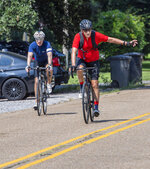 His personal challenge began on Tuesday and will continue through Sept. 2.

Phil Baker’s actual birthday is Aug. 28. He travels a route that largely uses River Road, with some variations, to take him 40 miles from home and then 40 miles back.

Baker, a lifelong athlete who’s competed in Ironman triathlons, began training for his birthday-week rides about a year ago.

He had been walking and hiking up to 20 miles a day, to take a break from cycling, then picked up the bike again, starting his training by traveling 10 miles in an hour, then slowly increasing his speed over longer periods of time.

“It wasn’t all done in an hour, but the hour goal was a way to start,” he said.

Baker said he also bought a “brand new, beautiful bike” — a Canyon bike he admires that’s used by one of the teams in the Tour de France.

A local bike shop helped Baker adjust the bike seat and handle bars to fit him, he said.

“It’s all about where you are on the bike,” Baker said. “Fit is everything.”

A native of the town of Beckenham, near London, Baker came to his passion for cycling through his father, Frederick Stanley Baker.

Armed with a bachelor’s degree in mechanical engineering and a master’s degree in air-conditioning and refrigeration, Baker, in his 20s, planned to leave Britain for better work opportunities in Canada. He found even better ones in the U.S.

He met his wife, Goldie Domingue, a native of Baton Rouge, at an architectural engineering company in Houston.

The couple later lived in Chicago, where Baker commuted by bike to and from work each day, for a total of 60 miles. He would ride on weekends, too, to make a total of 700 miles for the week.

Phil and Goldie moved to Baton Rouge in 1994.

Baker’s birthday challenge has grown a bit over the last two decades.