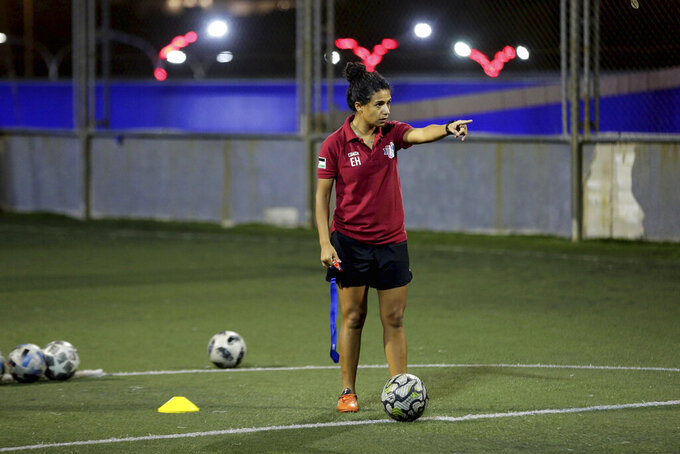 Raad Adayleh, ASSOCIATED PRESS
Insherah Heyasat, a football player, gives instructions during a training of the Orthodox Club's women's team in Amman, Jordan, Saturday, Oct. 22, 2022. Women's soccer has been long been neglected in the Middle East, a region that is mad for the men's game and hosts the World Cup for the first time this month in Qatar. (AP Photo/Raad AL-Adayleh)

AMMAN, Jordan (AP) — Sarah Asimrin still hears it from her uncles sometimes: “You’re a girl, it’s not right.” But on a recent evening, the 13-year-old Jordanian was on her club’s soccer field practicing alongside other girls and boys.

“I fell in love with the game because it’s got action. I love it a lot, more than any other sport,” said Asimrin.

Her younger sister Aya plays soccer as well and, despite the reservations of a few uncles, their family supports them. In fact, their father is a soccer coach at a private academy in the Jordanian capital, Amman.

Women’s soccer has been long been neglected in the Middle East, a region that is mad for the men’s game and hosts the World Cup for the first time this month in Qatar. The women’s game has been held back by lack of financing and by conservative attitudes contending that girls aren’t made for sports or that uniforms like shorts are too revealing.

But some places show signs of momentum. The growth usually depends on active government promotion of women’s sports. Where that happens, it taps into pent-up enthusiasm among girls and women and can shift public attitudes.

Jordan has been one of the leaders, with one of the region’s most successful national teams and a network of girls’ youth and school leagues.

Others are making new pushes. Last month, the first matches of a new women’s Premier League were held in Saudi Arabia, where women have only been allowed to attend soccer games since 2017. The Saudi national women’s team played against international teams for the first time this year.

Newly launched tournaments give women’s teams opportunities for international competition and, proponents hope, will encourage the creation of more teams.

The Asian and the much smaller West Asian football associations each held their first women’s club championships in 2019. The African federation inaugurated its women’s club championship last year in Cairo, and this year’s games began this week in Morocco, with a $400,000 prize for the winners — though that’s way below the $2.5 million that the winning men’s club gets.

Masar Athamneh, a 20-year-old on the women's team at Amman's Orthodox Club, said she’s been playing soccer since she was 12 or 13. She used to join her brother with the boys on the pitches in her neighborhood and watched European leagues on TV. Portugal’s Cristiano Ronaldo has been her idol “because he worked hard on himself.”

She’s hoping to one day play on Jordan’s national team in international matches.

“Sometimes we face some difficulties, of course. … Like, ‘This is a game only for boys or males’, ‘why do you wear shorts?’ … and so on. This is a huge problem we face,” she said. “But I think with the time, it’s getting better and better.”

Qatar has lagged behind even other Gulf countries on the international level in women's soccer. But since the tiny nation was named host of this year's World Cup, it has been developing the game with women's teams at many of its universities and holding soccer academies for girls.

Egyptian women have faced public backlashes as well. In 2020, a victory by the under-20 national women’s team over Lebanon was met by a barrage of sexual harassment on social media, with obscene comments and sneers that girls shouldn’t be playing soccer.

Administrators’ response was even more disturbing. They suspended upcoming games and fired the team’s coaching staff, raising fears that the entire team would be disbanded. Players went on TV talk shows and spoke out on social media, and the squad survived.

Outside pressure may give Egyptian women a boost. The African Champions League will require clubs in its men’s tournament to also have women’s teams, which should force the hands of top Egyptian clubs.

Where politics and powerful social opposition intersect, girls’ enthusiasm for the game never finds an outlet. For example, while women’s soccer is relatively active among Palestinians in the West Bank, it’s virtually non-existent in the Gaza Strip.

Gaza’s 2.3 million residents are generally conservative. Its Islamist rulers, the militant Hamas group, grant little space for women’s freedoms. The economy has also been crippled by a 15-year Israeli-Egyptian blockade, leaving little to spend on what are considered leisure activities.

One of Gaza’s few female sports teams is that of the Beit Hanoun Al-Ahli Youth Club, with 20 girls playing soccer and basketball. They wear pants instead of shorts, and long-sleeve shirts. Once they reach 17, they stop playing, often to get married, team manager Maha Shabat said.

“There is no support for women’s sports in the Gaza Strip … no support to be like girls in other parts of the world,” Shabat said.

Rama Ashour, a 14-year-old player on the soccer team, said she hopes to be able to keep going and even play on a national team.

“On the internet, I see many girls (elsewhere) playing normally,” she said. The largest obstacle in Gaza is society and tradition, but she said she wants to “think positively about the criticism. I will take it as a motive to proceed and challenge everyone.”

But others on the team are facing up to the limits. “My ambition — to be a player — is something impossible in this society,” said 16-year-old Hala Qassem.

The most tragic setback came in Afghanistan, where the Taliban takeover just over a year ago crushed the nascent women’s sports scene.

Hundreds of female athletes fled. Australia evacuated the women’s national team, and Portugal took in the girl’s youth team, while members of the youth development team were flown to Britain.

Those left behind have had their lives suffocated by Taliban bans on women’s sports and on teen girls going to school and restrictions on women moving around in public.

Sabera Akberzada had been playing center on her high school’s girls soccer team. Now the 17-year-old can’t play or attend school. She has lost contact with most of her teammates.

“Life has become hell for us, as a woman we can’t do anything by our choice,” Akberzada said. She had hoped one day to make it to Afghanistan’s national team. “Unfortunately, my dream remained just a dream.”

A former captain of the women’s national team, Khalid Popal, is now in Denmark, trying to keep the sport alive. She’s working to get out members of the under-15 team still in Afghanistan.

“I feel so worried and so sorry for women, young women who wanted to be independent,” she said. “I don’t think women will play sports again in Afghanistan.”