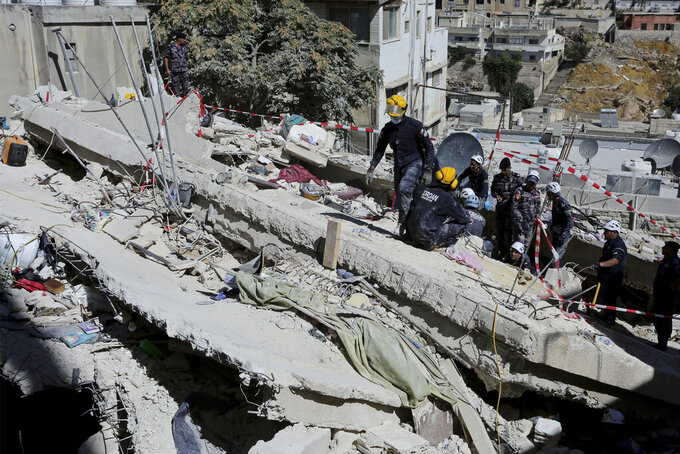 Raad Adayleh, ASSOCIATED PRESS
Rescue teams from the Jordanian Civil Defense carry out a search operation for residents of a four-storey apartment building that collapsed on Tuesday, in the Jordanian capital, Amman, Thursday, Sept. 15, 2022. Jordanian officials say the death toll from the collapse this week of the four-story building in the Jordanian capital of Amman has climbed. Rescuers were still searching for a missing woman on Friday. (AP Photo/Raad Al-Adayleh).

AMMAN, Jordan (AP) — Jordanian officials Saturday said they halted rescue efforts at the ruins of a collapsed four-story building after pulling out the 14th and what is believed to be final victim of the disaster.

It wasn't clear what caused the collapse Tuesday of the building in Amman, Jordan's capital. Authorities have arrested the building's owner and two maintenance workers.

At least 10 people were injured, and an infant was rescued from the rubble earlier this week.

Officials said that after recovering the remains of a missing woman from the rubble on Saturday, there were no more reports of missing people. Rescuers will remain at the site until the debris is cleared.

The building was located in Jabal al-Weibdeh, an older district of the Jordanian capital that is popular among wealthier residents and expatriates but also includes some poorer areas.

Jordan is a close Western ally that has long been seen as a bastion of stability in the volatile Middle East.