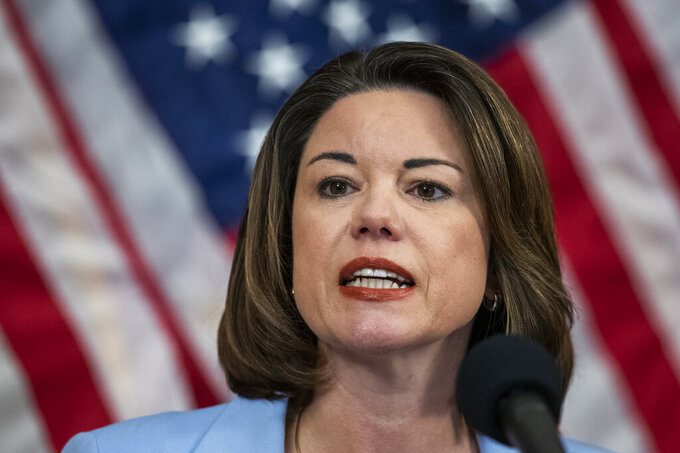 Manuel Balce Ceneta, ASSOCIATED PRESS
FILE - In this June 24, 2020, photo, Rep. Angie Craig, D-Minn., speaks during news conference on Capitol Hill in Washington. Craig's reelection campaign had a $4.7 million war chest at the end of June 2022, dwarfing that of her Republican challenger in what is expected to be Minnesota's closest congressional race this year. Craig reported raising more than $1.4 million in the second quarter of the year. (AP Photo/Manuel Balce Ceneta, File)

MINNEAPOLIS (AP) — Democratic U.S. Rep. Angie Craig's reelection campaign had $4.7 million in the bank at the end of June, dwarfing that of her Republican challenger in what is expected to be Minnesota's closest congressional race this year.

Craig reported raising more than $1.4 million in the second quarter of the year. Her campaign said 93% of the quarter’s contributions were from small donors and totaled $100 or less.

The two-term congresswoman from Prior Lake is in a rematch with Republican Tyler Kistner, a Marine Corps veteran who's also from Prior Lake and whom she defeated by just over 2 percentage points in 2020. Kistner reported raising $491,000 in the second quarter, finishing with $523,000 in cash on hand.

Redistricting didn't significantly change the political balance of their 2nd District, which includes suburbs and rural areas south of the Twin Cities. The GOP would love to unseat Craig as it seeks to capitalize on headwinds facing Democrats across the country and take control of the House in November. Outside groups are expected to make heavy independent expenditures in the race on both sides.

Craig and Kistner released partial fundraising numbers ahead of Friday’s deadline for filing second-quarter reports with the Federal Elections Commission.

There's an unusual situation in the race for the open seat in the Republican-leaning 1st District, which stretches across southern Minnesota. On Aug. 9, it will hold a special election to complete the last few months of GOP U.S. Rep. Jim Hagedorn's term — he died of cancer in February — and a primary to decide the candidates for the November ballot to represent the district starting next year.

GOP candidate Brad Finstad, a former director of USDA Rural Development for Minnesota who won the special primary in May, reported raising $458,000 in the second quarter and had more than $267,000 in cash on hand.

Republican state Rep. Jeremy Munson, who will be on the August primary ballot but hasn't been actively campaigning since losing the special primary, didn't immediately release his fundraising numbers.

The Democratic special primary winner, former Hormel Foods CEO Jeff Ettinger, raised $379,000 in the quarter and had $250,000 left in the bank.