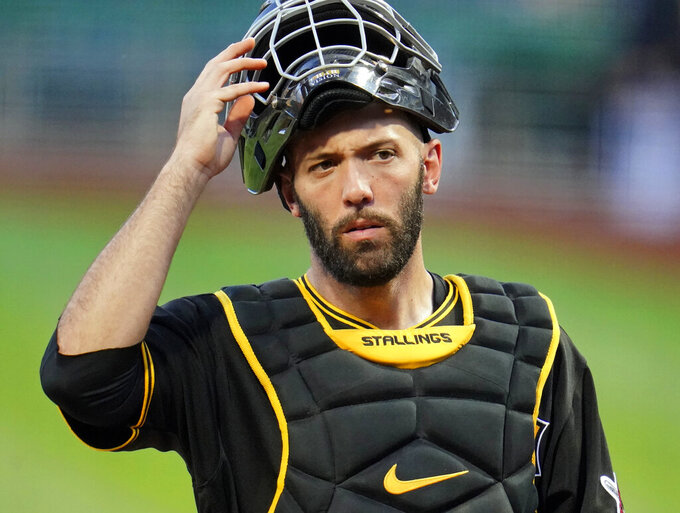 PITTSBURGH (AP) — Jose Quintana still believes he can be an effective starting pitcher. The Pittsburgh Pirates will give him an opportunity to prove it.

The Pirates signed the veteran left-hander to a one-year contract Monday, hoping he can steady a pitching staff that ranked as one of the worst in the majors in 2021.

Quintana is 83-80 with a 3.84 ERA in 10 seasons with the Chicago White Sox, the Chicago Cubs, the Los Angeles Angels and San Francisco. Quintana split time between the Angels and Giants in 2021, going 0-3 with a 6.43 ERA in 29 combined appearances.

The 32-year-old Quintana began 2021 as a starter with the Angels before going on the injured list with left-shoulder inflammation in late May. He worked entirely out of the bullpen upon his return in late June before being released and claimed off waivers by the Giants in August.

Quintana, who went 0-3 with a 7.22 ERA as a starter, called the season “frustrating” and worried he would be pigeon-holed as a reliever on the open market. When the Pirates reached out offering him a spot in their rotation, he jumped at it.

“I want to prove I am a starting pitcher and I feel better in that spot,” Quintana said. "This offseason and next season is going to be really important for me to show that. That’s the reason we are here.”

He joins a staff and a franchise that's in a state of flux at the major-league level. The Pirates are in the process of a massive reboot, one that continued on Monday when they sent Gold Glove catcher Jacob Stallings to Miami in exchange for pitcher Zach Thompson and a pair of prospects.

Stallings, 31, posted career-bests in home runs (8) and RBIs (53) in 112 games for Pittsburgh while deftly handling a transient staff that posted a 5.08 ERA and saw 17 different pitchers make at least one start.

The rotation around Quintana in 2022 remains very much a work in progress, with Mitch Keller, JT Brubaker and Max Kranick likely to be in the mix. Quintana will be by far the most accomplished of whatever group he's surrounded by, and the 2016 All-Star is fine with playing the role of mentor.

“I’m here to help out the younger guys, I can’t wait for that, you know, the same way the veterans do it for me in the past," he said.

Quintana spent some time playing in the Dominican Republic, posting a 3.00 ERA and six strikeouts in two starts. He cut short his stay after signing with Pittsburgh.

“I expect(ed) to pitch a little bit more but you know, I want to be focused for next year during my offseason,” he said.

The Pirates also came to terms with outfielder Ben Gamel, signing him to a one-year deal worth $1.8 million, with an additional $100,000 in performance incentives available if Gamel makes 450 and 550 plate appearances.

Gamel hit .247 with eight home runs and 26 RBIs in 111 games for the Pirates, primarily playing left field. He is the second position player re-signed by Pittsburgh over the last week. The Pirates agreed to terms with first baseman/outfielder Yoshi Tsutsugo on a one-year, $4 million deal last Wednesday.

To make room for Quintana and Tsutsugo on the 40-man roster, Pittsburgh designated left-hander Steven Brault and first baseman Colin Moran for assignment.

Brault went 12-18 with a 4.77 ERA while filling a variety of roles for the Pirates. He struggled to stay healthy in 2021 and went winless in seven appearances (three starts) with a 5.86 ERA.

Moran, part of the deal that sent Gerrit Cole to Houston in 2018, hit .269 with 44 home runs and 211 RBIs in 444 games across four seasons in Pittsburgh. He dealt with various injuries in recent seasons and moved from third base to first base full-time in 2021 after Pittsburgh traded Josh Bell to Washington.

The Pirates received Thompson and 22-year-old prospects Kyle Nicolas and Connor Scott from the Marlins in exchange for Stallings.

Thompson, originally drafted by the Pirates in the 48th round of the 2011 draft, went 3-7 with a 3.24 ERA in 75 innings for Miami in 2021. He began the season as a starter before shifting to the bullpen in September.

Nicolas, a right-handed pitcher, made 21 appearances between Class A and Double-A in 2021 and struck out 136 batters, the most among players in Miami’s minor-league system.