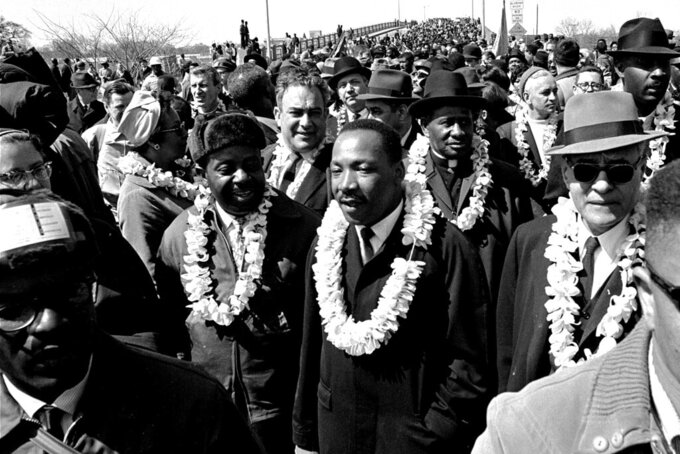 Timeline of the National Basketball Association during the 1960s. The timeline includes milestone moments in the league’s history and key moments off the court as the NBA celebrates its 75th season:

Feb. 1, 1960: Ezell Blair Jr., David Richmond, Franklin McCain and Joseph McNeil, students at North Carolina Agricultural and Technical College, stage a sit-in at the segregated Woolworth’s lunch counter in Greensboro, North Carolina on Feb. 1, 1960. They refused to leave after being denied service, and the sit-in movement spread across the South.

March 2, 1962: Wilt Chamberlain scores 100 points — a single-game record that hasn’t been approached. The 7-foot-1 center helped the Philadelphia Warriors beat the New York Knicks 169-147 in Hershey, Pennsylvania. Chamberlain had 23 points at the end of the first quarter, 41 at halftime and 69 at the end of the third. He saved his best for last, dropping 31 in the final period. He made 36 of 63 field goals and 28 of 32 free throws.

March 14, 1962: Oscar Robertson averages a triple-double for the Cincinnati Royals during the 1961-62 season. He averaged 30.8 points, 12.5 rebounds and 11.4 assists. No one averaged a triple-double again until Russell Westbrook accomplished the feat for the Oklahoma City Thunder in 2017.

April 14, 1962: Elgin Baylor scores 61 points in 48 minutes in the NBA Finals, helping the Los Angeles Lakers take a 3-2 series lead over the Boston Celtics. His Finals scoring record still stands. He made 22 of 46 shots from the floor and 17 of 19 free throws at Boston Garden.

October 1962: A 13-day standoff between the United States and then-Soviet Union begins when U.S. spy planes take photos showing the Soviets are positioning nuclear missiles under camouflage in Cuba. President John F. Kennedy orders a naval blockade of Cuba to stop the delivery of more missiles before negotiations end the crisis. The Soviets agree to remove missiles from Cuba with the U.S. removing its missiles from Turkey.

April 24, 1963: Bob Cousy goes out on top. The 34-year-old “Houdini of the Hardwood” injured his ankle with his Boston Celtics leading the Los Angeles Lakers in the fourth quarter of Game 6 of the NBA Finals. He returned with five minutes remaining and helped Boston win 112-109 for its fifth straight title.

Aug. 28, 1963: The Rev. Martin Luther King Jr. gives his “I Have a Dream” speech from the steps of the Lincoln Memorial during the March on Washington. King calls for an end to racism in the United States.

Nov. 22, 1963: President John F. Kennedy is shot and killed while riding in a motorcade through Dealey Plaza in Dallas, Texas. Lyndon Johnson is quickly sworn in as president after Kennedy is declared dead at Parkland Memorial Hospital.

Jan. 14, 1964: Just before the All-Star game, a group of players led by Bill Russell and National Basketball Players Association president Tommy Heinsohn agreed to boycott unless the league recognized their union and made significant concessions regarding pension, player safety and scheduling. The game was scheduled to be played on ABC and would be the first televised All-Star Game. With no game, the league would suffer embarrassment and a lost opportunity when it was trying to gain a national TV contract and following. League commissioner Walter Kennedy caved, and the game was played.

Feb. 27, 1964: Boxer Cassius Clay announces two days after beating Sonny Liston for the heavyweight championship that he has converted to Islam. That prompted his name change to Muhammad Ali.

Aug. 7, 1964: Two U.S. destroyers report being fired on by the North Vietnamese on Aug. 2 and Aug. 4. Congress approves the Gulf of Tonkin Resolution authorizing President Lyndon B. Jonson to take any measures necessary in southeast Asia, the foundation for fighting the Vietnam War.

1965: Oscar Robertson becomes the first Black president of the National Basketball Players Association, a title he held until 1974. In 1970, he filed a class action anti-trust lawsuit against the NBA on behalf of his colleagues seeking to prevent an NBA merger with the American Basketball Association until issues regarding player movement were resolved. It led to a settlement known as the “Oscar Robertson Rule” in 1976 that helped NBA players become the first major professional athletes to achieve free agency.

Feb. 21, 1965: Malcolm X is shot to death in the Audubon Ballroom in Manhattan before his speech to his group, the Organization of Afro-American Unity by one man using a sawed-off shotgun and two others with handguns. He had disagreed with Martin Luther King over fighting for civil rights, preferring Blacks separate from whites and a return to Africa.

March 7, 1965: John Lewis and Hosea Williams lead approximately 600 people planning to march to Montgomery who are stopped as they try to cross the Edmund Pettus Bridge leading out of Selma. They are met by sheriff’s deputies, state troopers and others who give them two minutes to disperse. More than 50 marchers, including Lewis, are hospitalized after the deputies and troopers overrun them with horses using billy clubs, bullwhips and tear gas. TV cameras broadcast the assault in what became known as “Bloody Sunday” with demonstrations across the country over the next two days supporting the marchers.

March 21, 1965: Martin Luther King Jr. leads a march from Selma to Montgomery and the Alabama capitol after demonstrators were stopped twice previously by local police. Approximately 25,000 took part in the roughly 50-mile march that reached the state capitol on March 25 and helped lead to the signing of the Voting Rights Act on Aug. 6, 1965.

April 15, 1965: John Havlicek’s steal late in Game 7 of the 1965 Eastern Division Finals sparks announcer Johnny Most’s famous radio call. Boston led 110-109 and the Philadelphia 76ers had possession with five seconds left. Havlicek peeked over and saw where Hal Greer’s pass was headed. He tipped it to Sam Jones, who dribbled out the clock. The Celtics went on to win their seventh title, beating the Los Angeles Lakers in five games in the Finals.

April 24, 1967: Wilt Chamberlain finally breaks through. The Philadelphia 76ers won the NBA title in 1967, the only year in the decade a team other than the Celtics won the championship. The 76ers beat the Celtics 4-1 in the Eastern Conference Finals, then topped the San Francisco Warriors 4-2 to win it all.

Jan. 30, 1968: North Vietnamese and Viet Cong troops launch attacks in major cities and areas with U.S. targets in a major turning point of the Vietnam War. The offensive continues into September and ends with both sides claiming victory. But public support in the U.S. weakens after months of reporting on the fighting.

April 4, 1968: The Rev. Martin Luther King Jr. is shot to death while talking with the Rev. Jesse Jackson while standing on the balcony of the Lorraine Motel in Memphis, Tennessee. King had returned to Memphis supporting Black sanitation workers protesting wage and working conditions.

June 5, 1968: Robert F. Kennedy is shot by Sirhan Sirhan in a kitchen hallway at the Ambassador Hotel in Los Angeles after winning the Democratic primaries in California and South Dakota. He dies 26 hours later at a hospital. Sirhan was convicted of murder with his death sentence later commuted to life in prison.

Oct. 16, 1968: Tommie Smith and John Carlos raise a gloved fist wearing black socks on the medal podium protesting how Blacks are treated in the United States after receiving their medals for the 200 meter race at the Mexico City Games. Smith won gold with a world record time of 19.83 seconds and Carlos bronze. Both Smith and Carlos were sent home.

July 20, 1969: Apollo 11 commander Neil Armstrong steps from the lunar landing module Eagle and becomes the first human to walk on the moon televised to hundreds of millions on Earth.

May 5, 1969: Los Angeles Lakers guard Jerry West becomes the first, and to this day only, player to win the Finals MVP award on a losing team. He had 42 points, 13 rebounds and 12 assists in a Game 7 loss to the Boston Celtics in Los Angeles. Bill Russell won his final title as player coach for his 11th championship in 13 years.