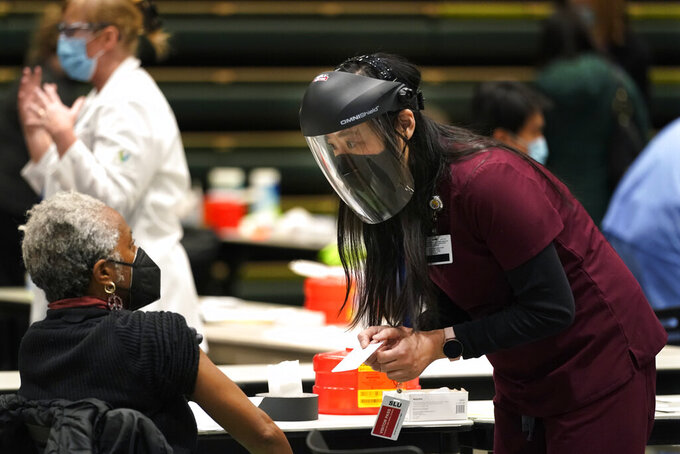 Ted S. Warren, ASSOCIATED PRESS
FILE - In this Jan. 24, 2021, file photo, Jenny Park, right, a clinical pharmacist with Virginia Mason Franciscan Health, explains the two-shot dosing of the Pfizer COVID-19 vaccine during a one-day vaccination clinic set up in an Amazon.com facility in Seattle. Monday, Oct. 18, 2021, was the final day for thousands of workers in Washington to prove they've been fully vaccinated for COVID-19 in order to keep their jobs. (AP Photo/Ted S. Warren, File)

OLYMPIA, Wash. (AP) — Monday is the final day for thousands of workers in Washington who want to keep their jobs to prove they’ve been fully vaccinated for COVID-19.

Washington’s vaccine mandate, issued by Gov. Jay Inslee in August, is believed to be among the strictest in the nation and covers more than 800,000 workers.

The mandate applies to most state workers, long-term care employees, and teachers and staff at the state’s schools, including the state’s colleges and universities. The only opt-out is a medical or religious exemption, though the exemption only ensures continued employment if a job accommodation can be made.

Recent numbers show that a vast majority of employees covered by the mandate have been vaccinated, but state officials said the total figure won’t be known for days or weeks as agencies work through exemption and job accommodation requests and as some workers may ultimately provide verification before the end of the day.

A Thurston County judge on Monday denied a last ditch effort by dozens of public sector employees who sued to block the mandate.

Judge Carol Murphy noted the hearing was not on the merits of the case, but on whether the plaintiffs were likely to be successful. In denying the request for an injunction, she said the mandate was likely to be found a valid use of the governor’s emergency powers.

“It is not surprising at all that people in Washington do not agree with the governor’s policy actions,” she said during her oral ruling from the bench minutes after arguments concluded. “It is also not surprising that other legislators and policy makers and other Washington residents think that no response or a different response is appropriate. Those questions are not before the court.”

Nathan Arnold, an attorney for the plaintiffs, argued there is no consistency on the policy, noting different places — like Spokane schools — were making accommodations like masking or testing and allowing people to keep their jobs while others were not. He said requiring those with sincerely held religious beliefs and medical conditions to lose their jobs if a job accommodation cannot be provided doesn’t help the governor’s goal to increase vaccinations.

“We will have the same number of unvaccinated people at midnight, we will just have less nurses and less firefighters,” he said.

Inslee spokesman Mike Faulk said a broad swatch of services in Washington, including public safety and health care, “have all been severely disrupted for more than a year now by the impacts of the COVID pandemic.”

“Vaccination is safe and effective, and it is the greatest tool we have to end these disruptions and get out of this crisis,” he said in a statement.

About 61,000 are employees of the 24 state agencies that are part of Gov. Jay Inslee’s executive cabinet are required to get the vaccine. That includes the departments of corrections, transportation and social and health services, and the Washington State Patrol. Vaccination will also be a requirement for any contractor wanting to do work with the state.

The governor’s Office of Financial Management released updated numbers last week that show nearly 90% of the 61,821 state workers covered by the mandate have been vaccinated as of early October.

More than 1,500 employees have received either a medical or religious exemption and have been accommodated by their agencies, according to the state, which increases the vaccination rate of non-accommodated employees to 92%.

An additional 1,541 received either a medical or religious exemption but were denied a job accommodation, and more than 1,000 accommodation requests were pending.

The Washington State Hospital Association has said that about 88% of Washington’s hospital staff statewide are fully vaccinated against COVID-19. Several hospitals are allowing employees who have started the vaccination process to take leave if their final vaccination status isn’t complete until after the deadline, so final numbers won’t be known until for weeks.

Katy Payne, a spokeswoman for the Office of Superintendent of Public Instruction, said data from districts on the vaccine and exemption status of their staff would start being collected on Tuesday and that the agency would have information to share at the end of the month.

As of this week, more than 77% of people age 12 and older have initiated vaccination in Washington state and more than 71% are fully vaccinated.