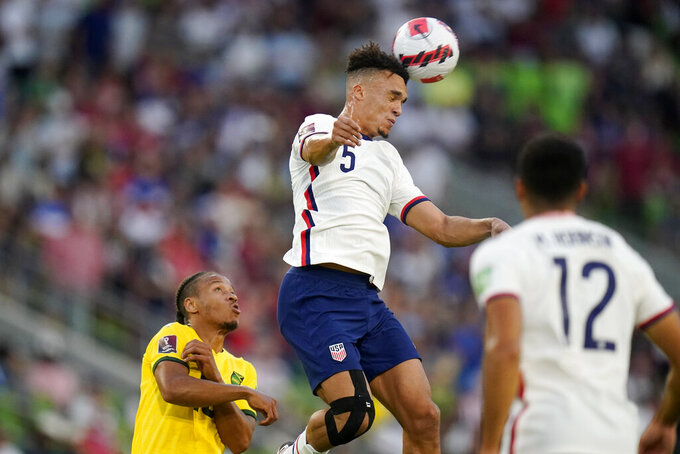 AUSTIN, Texas (AP) — Midfielder Weston McKennie, goalkeeper Zack Steffen and defender Antonee Robinson were left behind when the United States traveled to Panama on Friday for a World Cup qualifier.

McKennie has a sore right quadriceps after playing 90 minutes in the 2-0 victory over Jamaica on Thursday night. An MRI was negative.

Steffen plays for Manchester City and Robinson for Fulham, and they would have had to quarantine when returning to Britain next week because Panama is on the U.K.'s red list of nations with high rates of COVID-19.

The three players will head to Columbus, Ohio, where the U.S. team arrives Monday, a day after the game in Central America. The Americans play their third match of the FIFA window against Costa Rica at Lower.com Field on Oct. 13.

McKennie played 90 minutes in the U.S. qualifying opener, a 0-0 draw at El Salvador. He was held out of the 1-1 tie against Canada after violating team COVID-19 protocols, then was sent home before the 4-1 victory at Honduras.

Steffen has been displaced by New England's Matt Turner as the starting American goalkeeper in qualifying. Robinson started two matches and entered two as a substitute.