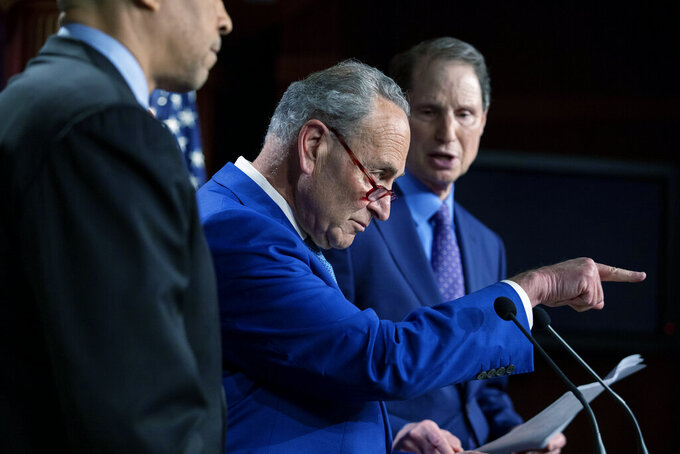 WASHINGTON (AP) — The Senate's top Democrat is backing a bill that would strike down a longstanding federal prohibition on marijuana, embracing a proposal that has slim chance of becoming law yet demonstrates growing public support for decriminalizing the drug.

Proposals to legalize marijuana are nothing new. But Senate Majority Leader Chuck Schumer is a sponsor of the effort unveiled Wednesday, underscoring how a once-fringe idea is increasingly mainstream. The measure would erode a central pillar of the decades-long war on drugs, which has disproportionately affected communities of color in the United States.

“I will use my clout as majority leader to make this a priority in the Senate,” said Schumer, of New York, who is the first Senate leader to support such an effort. “It's not just an idea whose time has come, it's long overdue.”

The bill would treat marijuana much like alcohol or tobacco, allowing it to be taxed and regulated. States could still outlaw its use. And those under the age of 21 couldn't purchase it. It would remain illegal to sell significant quantities without proper licensing and authorization, much like bootlegging alcohol. It would also clear the path for additional cannabis medical research.

But besides clearing obstacles to recreational use, advocates say the bill would help the poor and those from communities of color who have disproportionately been arrested, charged and jailed for marijuana crimes.

The bill would expunge federal nonviolent convictions and allow for records of them to be sealed. Those currently serving nonviolent marijuana-related sentences could also seek a review hearing and receive an expungement.

“We have our precious resources being used to lock up ... Black and brown people for doing things that presidents, Congress people and senators have done,” said Sen. Cory Booker of New Jersey, who is also a cosponsor of the bill, along with Oregon Sen. Ron Wyden.

A similar bill has passed the House. But the measure faces a virtually nonexistent path in a narrowly divided Senate, where 60 votes are needed to pass most legislation.

Schumer acknowledged that not all Democrats support the bill. That includes President Joe Biden, who has said he supports decriminalizing marijuana but believes the federal prohibition should remain.

“I’ve spoken in the past about the president’s views on marijuana. Nothing has changed and there’s no new endorsements of legislation today,” White House press secretary Jen Psaki said Wednesday.

Republicans and influential law enforcement groups are certain to oppose it, as well.

“I don't understand how Republicans who say they are for ‘states rights’ won't support what my colleagues are talking about," said Wyden. ”What this bill does is we decriminalize at the federal level, but we don't require states to legalize."

Schumer and the other sponsors of the bill say their proposal is a “discussion draft" that's intended to get the conversation started.

Though 18 states have legalized recreational use and 37 allow for some sort of medical marijuana, the remaining federal prohibition has created headaches for the industry in states where it is legal, making it hard for businesses to get banking services and loans.

Those in the marijuana industry called Schumer's support a significant advance.

“It is a big ask and I’m a realist,” said Joe Caltabiano, CEO of Choice Consolidation Corp. and the cofounder of Cresco Labs. “It will take a lot to get this bill through Congress.”

Maritza Perez, of the Drug Policy Alliance, said Congress is finally catching up with where the general public has long been. Meanwhile, those who are convicted of marijuana-related offenses face life-altering consequences, making it hard to get a job or receive public benefits.

Earlier this month, American sprinter Sha’Carri Richardson was left off the U.S. team's Olympic roster following a positive test for marijuana, costing her a chance at running on the relay team in Tokyo, in addition to her spot in the 100-meter individual race.

“Today is a historic day in the sense that we have the Senate majority leader introducing a bill to regulate and legalize marijuana. That's huge,” said Perez, who is a director in the office of national affairs for the organization. “For the public, marijuana has become culturally acceptable. But people forget that more than a half-million people are arrested for marijuana possession each year.”