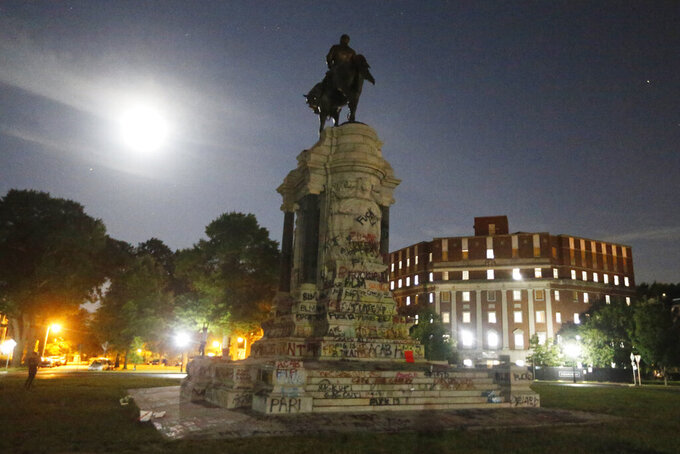 Steve Helber, ASSOCIATED PRESS
The moon illuminates the statue of Confederate General Robert E. Lee on Monument Avenue Friday June. 5, 2020, in Richmond, Va. The Supreme Court of Virginia ruled Thursday, Sept 2, 2021 that the state can take down an enormous statue that has towered over Monument Avenue in the state’s capital for more than a century and has become a symbol of racial injustice. (AP Photo/Steve Helber, file)

RICHMOND, Va. (AP) — Virginia’s Supreme Court ruled unanimously Thursday that the state can remove an iconic statue of Confederate Gen. Robert E. Lee from a prominent spot in the state's capital city, saying “values change and public policy changes too” in a democracy.

The 7-0 decision cited testimony from historians who said the enormous statue was erected in 1890 to honor the southern white citizenry’s defense of a pre-Civil War life that depended on slavery and the subjugation of Black people.

More than a century later, its continued display “communicates principles that many believe to be inconsistent with the values the Commonwealth currently wishes to express," the justices said.

The decision came in two lawsuits filed by Virginia residents who sought to block Gov. Ralph Northam's order to remove the bronze equestrian sculpture, which shows Lee in military attire atop a massive stone pedestal.

Virginia promised to forever maintain the statue in the 1887 and 1890 deeds transferring its ownership to the state. But the justices said that obligation no longer applies.

“Those restrictive covenants are unenforceable as contrary to public policy and for being unreasonable because their effect is to compel ... the Commonwealth to express, in perpetuity, a message with which it now disagrees,” the justices wrote.

Northam announced his decision in June 2020, 10 days after George Floyd’s death under the knee of a Minneapolis police officer sparked protests over police brutality and racism in cities nationwide, including Richmond. The nationally recognized statue became the epicenter of a protest movement in Virginia after Floyd’s death.

Separate lawsuits were filed by a group of residents who own property near the statue and by William Gregory, a descendant of signatories to the 1890 deed that transferred the statue and land it sits on to the state.

Gregory argued the state agreed to “faithfully guard” and “affectionately protect” the statue. And five property owners argued Northam is bound by a 1889 joint resolution of the Virginia General Assembly that accepted the statue and agreed to maintain the monument to Lee.

Plaintiffs' attorneys told the justices during a June 8 hearing that the governor exceeded his authority under Virginia's Constitution. Attorney General Mark Herring’s office countered that a small group of private citizens cannot force the state to maintain a monument that no longer reflects its values.

The high court sided with the governor, citing historians who testified the statue was erected as a monument to the Confederacy's “Lost Cause” and is now widely seen as a symbol of racial injustice.

“Democracy is inherently dynamic. Values change and public policy changes too. The Government of the Commonwealth is entitled to select the views that it supports and the values that it wants to express," Justice S. Bernard Goodwyn wrote.

Virginia Democrats cheered, while Northam's statement called the ruling “a tremendous win for the people of Virginia.”

One of Virginia's most powerful Black lawmakers, state Sn. Louise Lucas, tweeted, “For far too long, the Lee statue stood tall in our capital and represented nothing but division and white supremacy -- but it is finally coming down.”

Patrick McSweeney, an attorney for the residents, declined immediate comment, saying his clients have to review the decision. He did not say whether they are considering appealing to the U.S. Supreme Court.

“I think this is the end of the line for the plaintiffs,” said University of Virginia law professor Richard Schragger, who has followed the cases closely. He said the property owners’ lawsuit contains one contracts claim under the U.S. Constitution that could be a basis for an appeal, but he didn't think it would succeed.

Northam's office said the state had begun work on logistical and security preparations ahead of the removal, but no action on the statue was expected until at least next week.

The state has already put together detailed plans for the removal that include the extrication of a time capsule believed to be tucked inside the base.

The 21-foot (6-meter) statue is expected to be cut into pieces for transport to an undisclosed storage site.

The Northam administration has said it would seek public input on the statue’s future. For now, the 40-foot (12-meter) pedestal will be left behind amid efforts to rethink the design of Richmond's Monument Avenue. Some racial justice advocates don't want it removed, seeing the graffiti-covered pedestal as a symbol of the protest movement that erupted after Floyd’s killing.

The Lee statue was the first of five Confederate monuments erected on the avenue at a time when the Civil War and Reconstruction were long over, but Jim Crow racial segregation laws were on the rise.

When the statue arrived in 1890 from France, where it was created, thousands of Virginians used wagons to help pull its pieces more than a mile to where it now stands. White residents celebrated the statue of the Civil War hero and native Virginian, but many Black residents have long seen it as a monument glorifying slavery.

Richmond was the capital of the Confederacy for most of the Civil War. The city has removed more than a dozen other pieces of Confederate statuary on city land since Floyd’s death, which prompted the removal of Confederate monuments in cities across the country.