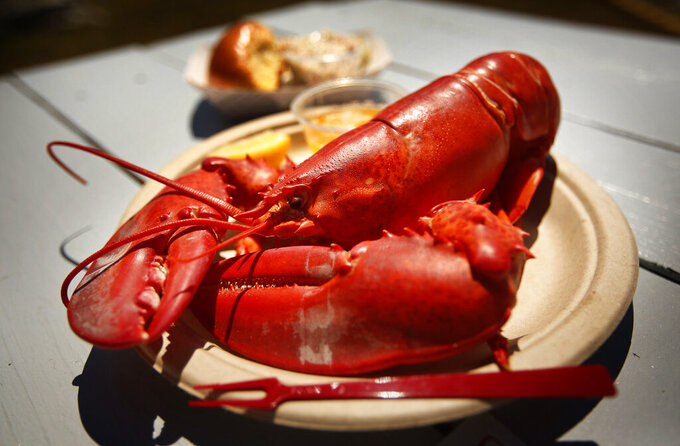 The price of lobster and seafood at large has shot up in recent years, and the price to lobster fishermen at the docks increased by about 60% last year. But lobster prices appear to be leveling off, and some retailers are selling the prized crustaceans for a couple dollars less than last year.

Members of the industry said the price to fishermen is also falling at a time when they are struggling with high bait and fuel prices and costly gear conversations intended to try to protect rare whales.

“And that's why it's hard — if bait was up and fuel was up and the price of lobsters was up, you'd be where you always are,” said Kristan Porter, president of the Maine Lobstermen's Association. “But with those down, that makes it hard to justify going in.”

The wholesale price of a live, 1.25-pound hard-shell lobster fell from $12.35 per pound on April 1 to $9.35 per pound on May 1, business publishing company Urner Barry reported this week. Lobster prices typically fall from April to May, but this year's price drop was the largest since 2018.

Wholesale lobster prices have been atypically high for nearly a year, but this month's price drop brings prices closer to historical norms. Some retailers such as Harbor Fish, a seafood market in Portland, are selling live one-pound lobsters for $12 per pound, which is $2 less than 2021 at this time.

Lobster prices are trending downward slightly at a time when many grocery staples are becoming more expensive as the U.S. copes with inflation. The price drop could reflect decreased demand amid concern about the economy at large, said John Sackton, an industry analyst and founder of SeafoodNews.com.

“It's discretionary, and anything you see about discretionary spending, people are cutting back,” Sackton said. “People's disposable income is going down.”

The lobster fishing business typically accelerates in the summer when many lobsters shed their shells and reach legal harvesting size. Prices to consumers usually drop when that happens because of increased supply, although last year they remained fairly high.

The U.S. industry is based in New England, especially Maine. Lobstermen in the state had a strong year in 2021, when they caught more than 108 million pounds of lobster valued at a state record of more than $730 million.