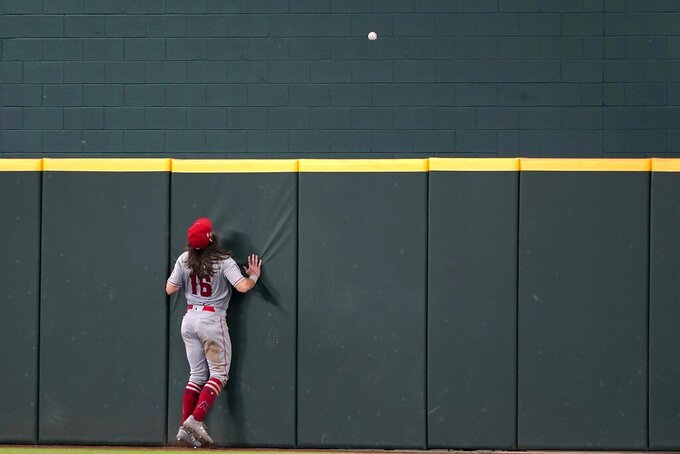 ARLINGTON, Texas (AP) — Adolis Garcia has been a bright spot throughout a 100-loss season for the Texas Rangers. After a long wait, the Cuban outfielder broke a pair of longstanding rookie records with one big swing.

Garcia broke the Rangers rookie record for home runs and RBIs with his two-run homer that was part of a big comeback, capped by Brock Holt's two-run double in the eighth, in a 7-6 victory over Shohei Ohtani and the Los Angeles Angels on Thursday.

“I knew when I hit it. I made really good contact. It was a really special moment,” Garcia said through a translator. “I just felt a little anxious to get it done.”

Garcia’s 31st homer, a two-run blast in the fifth that went 403 feet into the Rangers bullpen in right-center, pushed his RBI total to 90. It was his first homer in 14 games since he matched Pete Incaviglia’s rookie record of 30 homers in 1986, and he had tied the 88 RBIs by Incaviglia when he drove in two runs in the series opener Tuesday night.

“I've been wanting it so bad for him,” manager Chris Woodward said. “I’m glad he did it on one swing. ... Obviously, he’s had a heck of a year, All-Star, all of the above. All the accolades, he deserves.”

Ohtani, the two-way All-Star for Los Angeles who is done pitching this season, got his 99th RBI on his AL-leading eighth triple as the Angels batted around in a five-run first inning.

Ohtani finished 2 for 5 after leading off the ninth with an opposite-field flyout to the warning track in left — a ball that Woodward initially thought was going out of the park before DJ Peters caught it in the heel of his glove and used his right hand to hold it.

Ohtani is hitting .259 with three games remaining. The Japanese sensation also had a hustling double on a slow grounder through the left side of the infield, and he scored another run to give him 101 for the season. The previous night, Ohtani became the first AL player ever to reach 45 homers, 100 runs and 25 stolen bases in the same season.

“I cannot paint a picture well enough for what he’s able to do, and then just continue to play hard every day,” said Angels starter Alex Cobb, who allowed five runs in his five innings. “You’re proud to have him as a teammate ’cause he shows up and he plays hard and he really wants to win. You’d like to have that guy on your side.”

The Rangers hadn't even been tied in the game before Holt's double to right off Jimmy Herget (2-3), who pitched in four games earlier this season for Texas. That came after Nick Solak's one-out walk and a double by Peters, who had hit a three-run homer in the third.

Spencer Patton (2-2), the fourth Texas pitcher, threw two scoreless innings with three strikeouts. Joe Barlow worked a 1-2-3 ninth against the heart of the Angels lineup for his 11th save in 12 chances, and his eighth save in September.

“You get down five early in the first inning, it’s easy to kind of give up and just try and finish out the game. But we didn’t do that, and we kept battling,” said Holt, the veteran in a starting lineup with five rookies. “Big home runs from DJ and (Garcia).”

Brandon Marsh led off the game with a single and Ohtani immediately followed with a triple to right field. Taylor Ward added a two-run double in the five-run first off rookie Glenn Otto, who threw 63 pitches in his two innings.

Cobb had allowed only three homers in 91 innings this season before Peters' 436-foot drive to straightaway center with two outs in the third, and he also gave up the Garcia blast. The right-hander struck out five and walked two. ... Angels 1B Jared Walsh went 3 for 3 with a walk, and is 10 for 21 (.476) over his last five games.

Angels: Ward left the game with right abductor tightness, and manager Joe Maddon said he won't play in the final three games of the season. Juan Lagares took over in left field in the bottom of the second inning, and his RBI single in the fifth put Los Angeles up 6-3.

Angels: Los Angeles finishes its season with a three-game series at Seattle.

Rangers: Texas closes out the season with a three-game series at home against Cleveland, which will be playing its final games as the Indians before it becomes the Guardians.