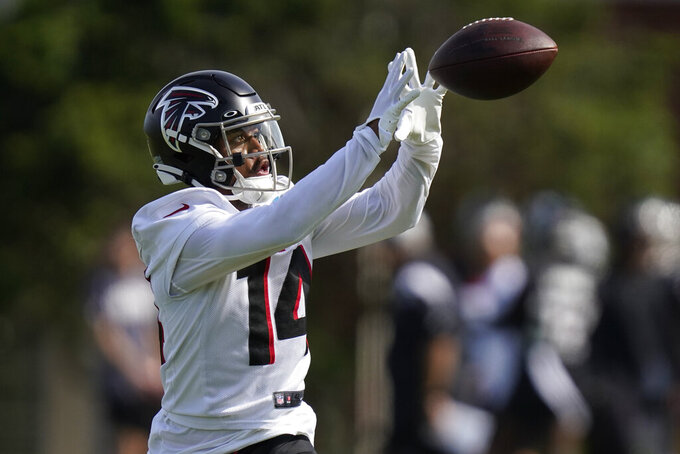 The Falcons began training camp Wednesday with a roster that has only a few positions settled. The most intriguing battle will be at quarterback, the position Marcus Mariota and Desmond Ridder are competing for, but the team must decide on three starters on the offensive line along with two starters on the defensive line, two at linebacker and two in the secondary.

“You come out here, you want to improve, you want to fundamentally get better,” Smith said. “You want to eliminate things that get you beat pre-snap. There’s a healthy competition. We’ve got competition at nearly every spot."

The QB competition is front and center as Mariota and Ridder work to replace Matt Ryan, the team’s franchise cornerstone the past 14 years. Ryan was traded to Indianapolis during the offseason and even with his experience and expertise last season, the Falcons were outscored 459-313.

Atlanta lost top receivers Calvin Ridley to a suspension for at least the 2022 season for gambling and Russell Gage to free agency. Leading tackler Foye Oluokun signed with Jacksonville.

Mariota and cornerback Casey Hayward were signed to two-year deals, but other projected starters such as linebackers Lorenzo Carter and Rashaan Evans agreed to one-year contracts.

Smith was credited last year with keeping his team in playoff contention until late December despite all but one of the seven wins getting decided by seven points or fewer. Atlanta went 3-0 in games decided by a field goal or less.

Only the Houston Texans face longer Super Bowl odds than Atlanta, according to FanDuel.

“For us, we don’t care about that,” linebacker Mychal Walker said. “Nobody says we’re just going to lose this week and go home and not have to practice. We’re here to have fun. Nobody thought the Cincinnati Bengals were going to be in the Super Bowl last year, but they did it. All I know is we’re just trying to get ready here.”

The Falcons project their top two draft picks, Drake London of USC and outside linebacker Arnold Ebiketie of Penn State, as current starters. The rest are likely to serve in reserve roles and on special teams.

The top returning players on the roster are Pro Bowl tight end Kyle Pitts and cornerback A.J. Terrell, so it will be up to Mariota or Ridder to fill the gap at QB. The two spent nearly 24 hours together as they are roommates in camp and are constantly in the same meeting room.

Mariota hasn’t started since the 2019 season for Tennessee and he made only 11 appearances over the past two years with Las Vegas. He says he’s ready for the challenge even with the team’s leading returning receiver, Olamide Zaccheaus, finishing last year with just 31 catches for 406 yards on 53 targets.

“It comes down to that this is the foundation you’re building for the season and it’s really just helping these young guys come along,” Mariota said. “For rookies and even first-year players that don’t have a lot of experience, you have to try to simulate game-type scenarios out on the practice field so that when they get to the game, they feel comfortable.”

Mariota isn’t too concerned with a lack of targets, though, with Pitts and London, first-round picks by Atlanta in the past two years, both in the offense.

Ridder, a third-round pick from Cincinnati this year, has impressed Smith with his football acumen with the coach saying he was “light years ahead of most quarterbacks his age.”

It’s all a work in progress for Smith, who was pleased to have temperatures in the high 80s for the first practice.

“It’s the way we work, the messaging, and you let these guys have real competition,” Smith said. “You come out here and you do drills and you try to set them up so that everything you do is practical application to what helps you win. You improve individually and as a team and then you’ve got to make it competitive and reward the guys that compete and win.”

NOTES: The Falcons signed DT Darrion Daniels, who spent the 2021 season on San Francisco's practice squad. Daniels had four tackles with the 49ers in limited playing time in his 2020 rookie season. The Falcons had an opening on their 90-man roster, and were looking for depth in the middle of their defensive line, following the retirement of former Bears DT Eddie Goldman only two weeks after signing a one-year deal with Atlanta.