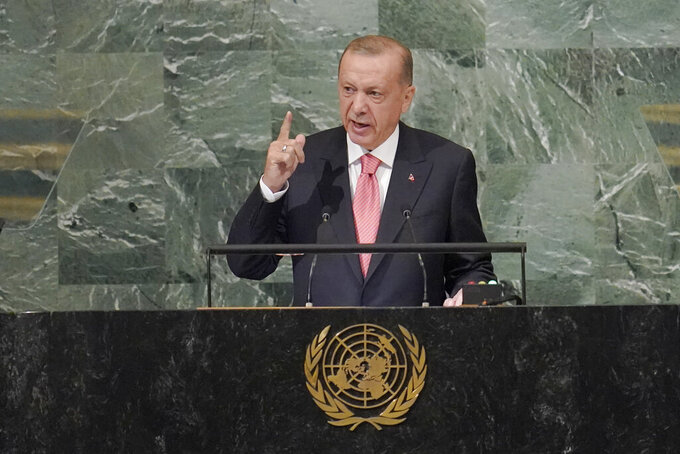 ANKARA, Turkey (AP) — Turkey on Monday summoned the Greek ambassador to protest the alleged deployment of dozens of U.S.-made armored vehicles to Greek islands which Ankara says should remain demilitarized in line with international treaties.

President Recep Tayyip Erdogan warned, meanwhile, that Turkey wouldn't hold back on defending its rights and interests against Greece.

Turkish media on Sunday published aerial images that they said showed the deployment of armored vehicles by Greece to the Aegean islands of Samos and Lesbos, heightening tensions between the two NATO countries that have a history of rivalry. Turkish officials say the deployment is in violation of the islands' nonmilitary status according to international law.

Erdogan accused Greece of engaging in acts of provocation against Turkey.

“We will not fail to defend our country’s rights and interests against Greece by using all the means at our disposal, when necessary,” Erdogan said following a Cabinet meeting.

Turkey and Greece have decades-old disputes over an array of issues, including territorial claims in the Aegean Sea and disputes over the airspace there. The disputes have brought them to the brink of war three times in the last half-century.

Tensions flared in 2020 over exploratory drilling rights in areas of the Mediterranean Sea — where Greece and Cyprus claim exclusive economic zones — leading to a naval standoff.

More recently, Turkey has accused Greece of violating international agreements by militarizing islands in the Aegean Sea. It has also accused Greek surface-to-air missiles of locking on to Turkish F-16 fighter jets carrying out a reconnaissance mission in international airspace — an accusation Greece has rejected.

Athens says it needs to defend the islands — many of which lie close to Turkey’s coast — against a potential attack from Turkey.

A Greek government official told The Associated Press that Greece “fully respects” its international obligations, adding that the Greek ambassador told his interlocuters that “Greece is not the country that is threatening its neighbor with war or assembling a large landing force on its coastline as Turkey has done.”

The official added that Turkey “continues to violate Greece’s sovereignty with its continuous violations of its airspace and overflights of Greek territory.” The official, who wasn't authorized to speak publicly to the news media, made the remarks on condition of anonymity.

Turkish media reports quoted security officials as saying 23 of the armored vehicles were sent to Lesbos and 18 others were sent to Samos.

Meanwhile, Greek authorities said a six-year-old migration agreement between Turkey and the European Union remains in effect despite an escalating dispute between the two neighbors over the treatment of refugees.

Notis Mitarachi, the migration affairs minister, said Greece will continue to observe the 2016 deal that allows it to send back most migrants travelling illegally from nearby Turkey.

“It is clear that for those coming from Syria, Afghanistan, Somalia, Pakistan and Bangladesh, that Turkey is a safe country,” Mitarachi said. “Unfortunately, smugglers are still ‘selling tickets’ to people from those countries.”

Speaking at the U.N. General Assembly, Erdogan last week accused Greece of committing “crimes against humanity” by carrying out potentially deadly expulsions of migrants travelling from the Turkish mainland to nearby Greek islands.