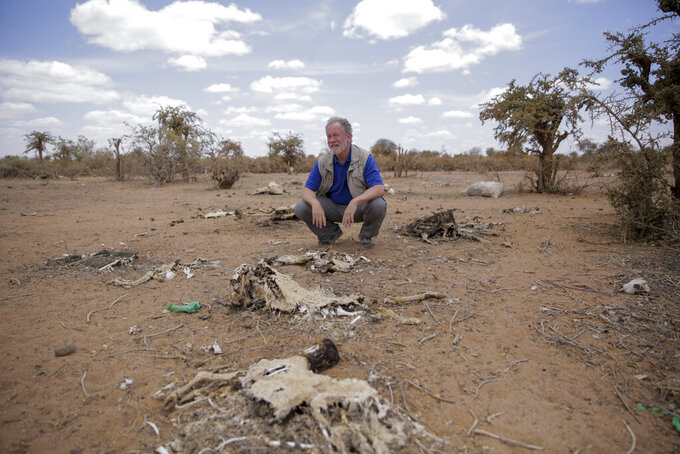 Brian Inganga, ASSOCIATED PRESS
FILE - World Food Program chief David Beasley looks at carcasses of animals that died of hunger in the village of Wagalla in northern Kenya Friday, Aug. 19, 2022. Battling droughts, sandstorms, floods, wildfires, coastal erosion, cyclones and other weather events exacerbated by climate change, the African continent needs to adapt, but it needs funds to do so. It’s one of the main priorities for the African Group of Negotiators at the United Nations climate summit, known as COP27, currently underway in Egypt. (AP Photo/Brian Inganga, File)

SHARM EL-SHEIKH, Egypt (AP) — Battling droughts, sandstorms, floods, wildfires, coastal erosion, cyclones and other weather events exacerbated by climate change, the African continent needs to adapt, but it needs funds to do so, leaders and negotiators from the continent said at the U.N. climate summit.

It's one of the main priorities for the African Group of Negotiators at the summit, known as COP27, currently underway in Egypt. Ephraim Shitima, the group's chair, said Africa is keen to see the outcomes of the negotiations translated into action for the continent where millions are facing climate-related disasters.

Shitima said the summit “should provide solutions to the millions of people in the continent,” adding that Africa needs finance to adapt to extreme weather as well as “to facilitate just energy transition and boost renewable energy uptake.”

A recent study released by the World Bank said that climate-related events will squeeze more than 132 million people into poverty worldwide with African countries losing between 10% and 15% of their GDP by 2050.

Climate finance for adapting to climate-related disasters and stopping them from getting worse remains a thorny issue at climate negotiations. A promise of $100 billion a year in climate funding is yet to be fulfilled despite being two years past its deadline.

Speakers at the Africa Pavilion at the conference mulled over how to close the gap between the continent's financial needs on climate and what it actually receives, which is currently estimated by the African Development Bank to be between $160 billion and $340 billion by 2030.

“We know they make extortionate profits,” he said. He added that countries would seek compensation for climate harms from major polluters, known as loss and damage in climate negotiations.

“We see this loss and damage funding as a form of solidarity of nations standing with each other and as form of funding to countries that are in distress," Brown said.

"We are definitely pushing for that,” Ramkalawan told The Associated Press.

The Least Developing Countries group, which represents some 46 low income nations have also put money for adaptation and loss and damage among their top demands.

“COP27 must keep adaptation at the center,” said Madeleine Sarr, the chair of the LDC group, adding that the group "want to see how the shortfall in the $100 billion per year promise will be made up.”