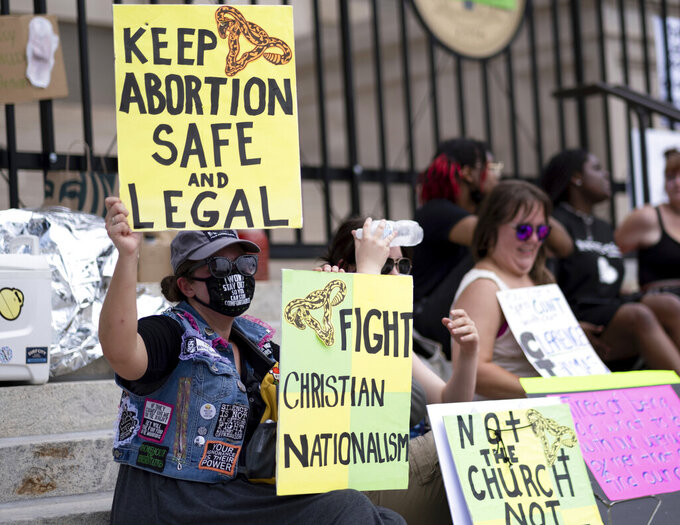 Ben Gray, ASSOCIATED PRESS
FILE - A small group, including Stephanie Batchelor, left, sits on the steps of the Georgia state Capitol protesting the overturning of Roe v. Wade on June 26, 2022. A judge overturned Georgia’s ban on abortion starting around six weeks into a pregnancy, ruling Tuesday, Nov. 15, 2022 that it violated the U.S. Constitution and U.S. Supreme Court precedent when it was enacted. (AP Photo/Ben Gray, File)

ATLANTA (AP) — Abortion providers in Georgia resumed performing the procedure beyond six weeks of pregnancy this week after a judge threw out the state's abortion ban. But some said they are moving cautiously amid an ongoing legal fight that could just as quickly restore the restrictions.

Phone calls to the carafem clinic in Atlanta surged starting Tuesday, when the judge's ruling came out. The clinic resumed providing abortions up to 13 weeks of pregnancy on Wednesday, but staff has cautioned patients that the situation is “tenuous," chief operations officer Melissa Grant said.

“We will continue to take it as it is right now and take it a day at a time and an hour at a time if that’s what it requires,” she said in a phone interview.

The Feminist Women's Health Center, also in Atlanta, plans to resume abortions up to 22 weeks of pregnancy starting on Friday. It has added another day to its abortion schedule and is also looking for an additional provider, said MK Anderson, the clinic’s director of development and communications.

But Anderson said it's not scheduling appointments more than a few days out right now over concerns a court could abruptly reinstate the state's ban, which started roughly six weeks into pregnancy.

Explaining the current fluidity of Georgia's abortion landscape is hard on staff.

“It’s like this roller coaster conversation we have to have with our patients, and that can be emotionally difficult,” Anderson said.

Planned Parenthood Southeast on Wednesday resumed scheduling patients at four Georgia health centers for medication abortion up to 11 weeks, consistent with the services it offered prior to the ban, spokesperson Amy Kennedy said.

The organization is also working to expand abortion options at its health centers.

“We remain committed to offering patients the resources they need to make the decisions that are best for their own bodies and lives,” Kennedy said in a statement.

Fulton County Superior Court Judge Robert McBurney ruled Tuesday that the state's abortion ban was invalid because when it was signed into law in 2019, U.S. Supreme Court precedent under Roe. v. Wade and another ruling allowed abortion well past six weeks. The ruling came in a lawsuit filed by groups including carafem, the Feminist Women's Health Center and Planned Parenthood Southeast.

“If the judicial branch has declared a constitutional right, legislatures exceed their authority, improperly expand their role, and fundamentally alter the balance struck by the separation of powers when they enact laws they know to be plainly and facially unconstitutional,” he wrote. “Those laws are void upon passage.”

The decision immediately prohibited enforcement of the abortion ban statewide. It had been in effect since July and prohibited most abortions once a “detectable human heartbeat” was present.

Cardiac activity can be detected by ultrasound in cells within an embryo that will eventually become the heart around six weeks into a pregnancy. That means most abortions in Georgia were effectively banned at a point before many people knew they were pregnant.

Abortion providers have said the ban forced them to turn away many pregnant women, who could then either travel out of state for an abortion or keep the pregnancy.

The state attorney general's office appealed McBurney's ruling to the Georgia Supreme Court, though it did not indicate in court documents whether it would seek an order to immediately block the decision.

An email Thursday to a spokesperson for the office, Kara Richardson, was not immediately returned.

McBurney did leave the door open for the state Legislature to pass the abortion ban again now that the Supreme Court has overturned Roe v. Wade. The legislature is not due back until January 9.

Republican Gov. Brian Kemp could call a special legislative session, but Andrew Isenhour, a spokesperson for his office, said Thursday there have been “no discussions to that effect.”