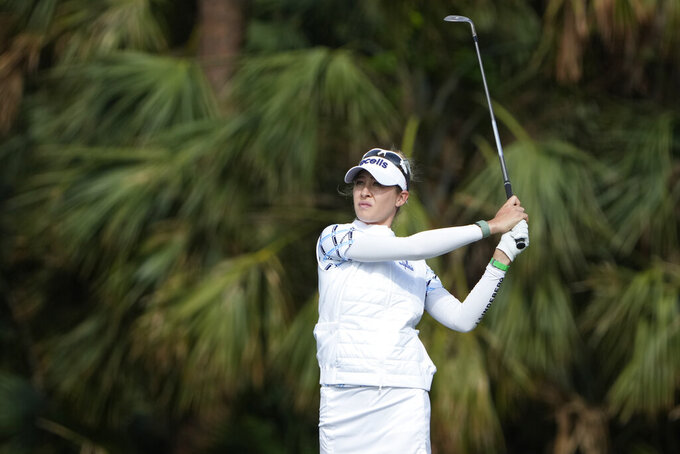 Notes: PGA Tour, LPGA Tour and PGA Tour Champions players make up the 12 two-player teams in this unofficial event. ... Next year it changes to a mixed-team event. ... Jason Kokrak and Kevin Na will not defend because it is a PGA Tour-sanctioned event and they have been suspended for signing with Saudi-backed LIV Golf. ... This is the third time in the last four PGA Tour-sanctioned events that LIV players were defending champions. ... Former Ryder Cup captain Steve Stricker, a four-time winner on the PGA Tour Champions this year, is playing with Cameron Young, the PGA Tour rookie of the year. ... Nelly Korda (with Denny McCarthy) and Lexi Thompson (with Maverick McNealy) are the two LPGA Tour players in the field at Tiburon. ... Nine players in the Shootout field from last year are now with LIV. ... Harris English and Matt Kuchar are three-time winners of the Shootout. They are paired together again this year.

Next tournament: Sentry Tournament of Champions on Jan. 5-8.

Notes: The field does not have anyone from the top 50 of the world because Louis Oosthuizen fell out of the top 50 this week for the first time in eight years. ... Oosthuizen joins South African major champions Charl Schwartzel and Ernie Els at Leopard Creek. Schwartzel is a four-time winner of the Alfred Dunhill Championship, while Els won it three times. ... Eight players who regularly competed in LIV Golf are playing. ... The tournament dates to 1995. ... Adam Scott won his first professional title at the Alfred Dunhill Championship in 2001, beating Justin Rose by one shot with Nick Faldo finishing two shots behind. ... Dean Burmester, who earned a PGA Tour card this year, remains outside the top 50 approaching the end of the year. ... The Mauritius Open next week will be the final event of 2022 for the Sunshine Tour and European tour.