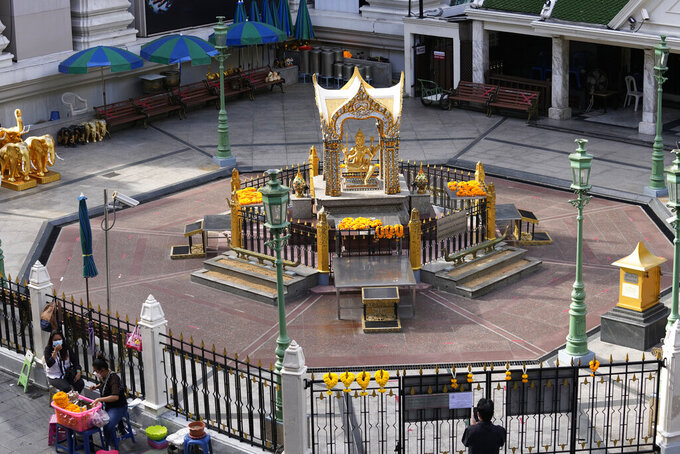 BANGKOK (AP) — A Thai court on Tuesday resumed the long-delayed trial of two members of China's Muslim Uyghur minority accused of carrying out a 2015 bombing at a Bangkok landmark that killed 20 people.

Another 120 people were injured in the Aug. 17, 2015, bombing of the Erawan shrine, which is popular among Chinese and other tourists.

Thai authorities have said the bombing was revenge by a people-smuggling gang whose activities had been disrupted by a crackdown. Thailand cracked down on human traffickers earlier in 2015 after abandoned camps for Rohingyas fleeing persecution in Myanmar and economic migrants from Bangladesh were found in the jungles along the Thai-Malaysian border. Officials have given few details about what the link to the bombing might be, but many Uyghurs try to escape persecution and tight control in China with the help of professional smugglers.

However, some analysts suspect the bombing was the work of Uyghur separatists angry that Thailand in July that year forcibly repatriated scores of Uyghurs to China. The shrine's popularity among Chinese tourists appeared to support the theory that the bombing had a political element.

The defendants, Mieraili Yusufu and Bilal Mohammad, pleaded not guilty when the trial began in 2016 and said they suffered mistreatment and torture in jail after their arrests. Police said they believe Yusufu detonated the bomb minutes after a backpack containing the device was left at the shrine by Mohammad.

The last session of their trial, which was delayed repeatedly by difficulties in finding suitable translators, was in 2019, said Chuchart Kanpai, a lawyer for Mohammad. The case was then transferred from a military court that previously had jurisdiction to the civilian Bangkok Southern Criminal Court after a return to elected civilian rule following a military coup. But the court proceedings were then suspended during the COVID-19 pandemic.

“I think it will take two more years before we see any result. This year the case won’t progress much. We can only take two or three witnesses a day and we still have two to three hundred witnesses left on the plaintiff’s side,” he said.

The defendants are believed to be the only two suspects in custody out of 17 people that authorities said were responsible for the bombing. Some of the other suspects are Turks, with whom Uyghurs share ethnic bonds.

Police said the case against the two defendants is supported by security video, witnesses, DNA matching and physical evidence, in addition to the suspects' alleged confessions.