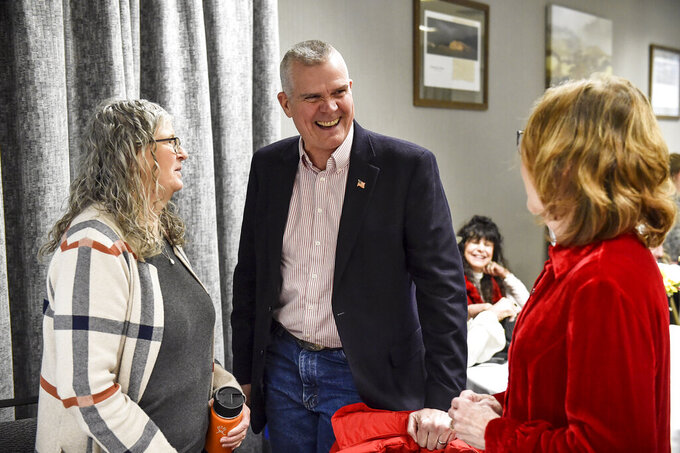 BILLINGS, Mont. (AP) — Montana Republican Matt Rosendale won a second term in the U.S. House on Tuesday as he fended off a pair of challengers in the race for a newly drawn district representing the eastern portion of the state.

The race for the other newly-drawn U.S. House district where President Donald Trump’s former interior secretary, Republican Ryan Zinke, was vying for the seat was too early to call Tuesday night.

Rosendale and Zinke are trying to extend the recent GOP dominance in the state. Republicans have not lost a U.S. House race in Montana since 1994. Over the past decade, voters swept Democrats from almost every statewide elected office, except for U.S. Sen. Jon Tester, who is up for re-election in 2024.

After the eastern district was called for Rosendale shortly after midnight, he said the results reflected concern among voters about high energy costs, a shaky economy and rising crime that the lawmaker blamed on lax border security.

To address those worries, Rosendale said Republicans must focus on increasing domestic energy supplies and securing the southern border to reduce the flow of dangerous drugs.

“If we focus on those two issues, then we will have a dramatic impact on improving the lives of people in the state of Montana and across the nation,” he said.

Rosendale emerged during his first term as a hard-right conservative. He’s backed Trump’s false statements about the 2020 election and recently voted against U.S. support for Ukraine in its war against Russia, citing what he said are more pressing security needs along the southern border.

His opponents — Democrat Penny Ronning and independent Gary Buchanan — characterized Rosendale as too extreme for Montana and beholden to outside interests that have heavily supported his political career.

Rosendale emphasized the importance of dissenting views in Washington and blamed Democrats in control of Congress and the White House for blocking reforms that could boost the agriculture and energy industry.

Rosendale through Oct. 19 raised more than $2.1 million for the election — about three times as much cash as Buchanan and Ronning combined, according to Federal Election Commission filings.

Also on the ballot were two Montana Supreme Court races, one of which became abnormally politicized, and an abortion-related referendum. It was too early to call both races Tuesday.

Results were delayed in some counties as election officials waited to post results until everyone waiting in line when polls closed was able to cast a ballot. In Missoula County, election officials inadvertently included the results from a Monday equipment test in their initial results, causing a long delay while they adjusted the vote report to remove the erroneous information.

Zinke gathered with supporters at a bar in his hometown of Whitefish to watch the results while his challenger, Monica Tranel, was at the Union Club in Missoula.

Zinke won two statewide elections to the U.S. House before joining Trump’s cabinet, where he eased restrictions on oil and gas drilling before resigning amid numerous ethics investigations.

The former U.S. Navy SEAL, who barely survived June's primaryover a far-right opponent, is vying for the seat representing western Montana. He is being challenged by Democratic attorney Monica Tranel and Libertarian John Lamb.

Zinke has tried to portray himself as moderate, saying he does not support a no-exceptions ban on abortion, but has parroted GOP attacks on the Biden administration, including on gun rights and border security.

Zinke denied wrongdoing as Interior secretary and dismissed as vindictive investigators’ reports that he lied during a probe into a Native American casino proposal and about his involvement in a real estate project in his hometown.

Tranel is a consumer rights and environmental attorney from Missoula who ran unsuccessfully for Public Service Commission in 2020. She's campaigned on pledges to promote renewable energy development, expand affordable housing and end tax breaks for corporations and the wealthy.

Lamb is an antigovernment extremist who thinks the punishments for many Jan. 6 Capitol rioters have been too harsh.

In elections for Montana Supreme Court, incumbent Ingrid Gustafson was challenged by James Brown, an attorney who was elected as a Republican to the state Public Service Commission. Incumbent Jim Rice is challenged by Billings attorney Bill D'Alton.

Elections of justices are supposed to be non-partisan. However, the race between Gustafson and Brown has drawn huge sums of cash as Republicans back Brown and try to push the court in a more conservative direction, while Democrats hope to maintain its liberal majority to prevent the erosion of abortion rights in Montana.

The abortion related ballot referendum raises the prospect of criminal charges for health care providers unless they take “all medically appropriate and reasonable actions to preserve the life” of an infant born alive, including after an attempted abortion.

Opponents argue the proposal could rob parents of precious time with infants born with incurable medical issues if doctors are forced to attempt treatment. Supporters say it's meant to prevent the killing of infants outside the womb after failed abortions, which already is illegal.