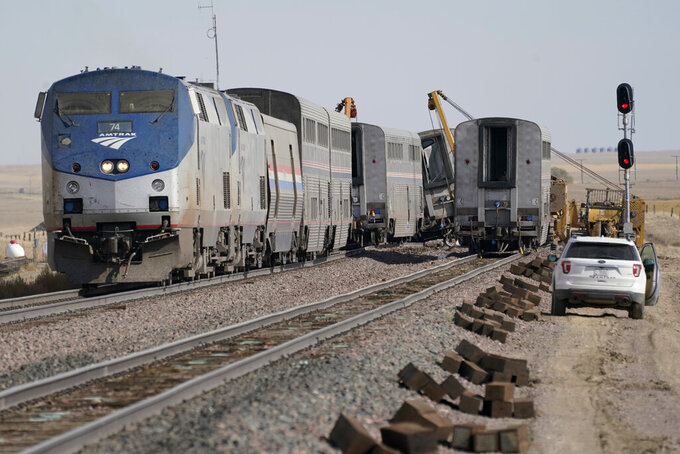 Ted S. Warren, ASSOCIATED PRESS
FILE - In this Sept. 26, 2021, file photo, engines and cars from an Amtrak train that derailed a day earlier are shown at the derailment site just west of Joplin, Mont. A preliminary report released Tuesday, Oct. 16, 2021, on the derailment of an Amtrak train in north-central Montana last month that killed three people and injured dozens more gave no information on the cause of the accident. (AP Photo/Ted S. Warren, File)

HELENA, Mont. (AP) — Two Democratic members of Congress introduced legislation Wednesday to end an arbitration clause that Amtrak implemented in January 2019 and give customers the right to sue the passenger rail service to resolve disputes.

“This bill will restore vital legal rights to the travelers who are injured on Amtrak trains and seek just redress,” U.S. Sen. Richard Blumenthal of Connecticut said in a statement about his legislation.

The bills were introduced just over a month after a westbound Amtrak train derailed in north-central Montana, killing three people and injuring dozens of others.

“Amtrak’s current forced arbitration and class action ban policies are unjust and unfair,” said Blumenthal, a member of the Senate Committee on Commerce, Science and Transportation.

“Riders are often unaware they’ve signed away their legal rights with the purchase of a ticket until the worst happens, like so many passengers impacted by the Montana crash discovered first hand. Legal accountability will be a powerful incentive to safer Amtrak practices," he said.

U.S. Rep. Conor Lamb of Pennsylvania, a member of the House Committee on Transportation and Infrastructure, introduced a companion bill in the House.

More than two dozen lawsuits filed after the Montana derailment are also challenging the arbitration clause, which limits Amtrak's damages to $295 million per incident.

“Amtrak receives nearly $2 billion annually in taxpayer dollars, yet shields itself from public scrutiny that an open and neutral court system provides,” said Remington A. Gregg, counsel for the consumer group Public Citizen, which supports the legislation. “Forced arbitration clauses are anti-transparency clauses."

The National Transportation Safety Board is still investigating the cause of the Sept. 25 derailment in Montana.