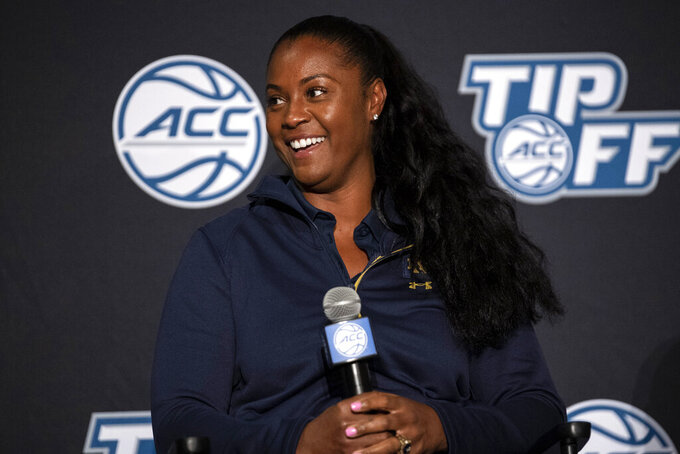 The 44-year-old Ivey would like nothing better than to put the Fighting Irish back into the NCAA Tournament, which was pretty much an annual rite of March under McGraw. During her 32 years in South Bend, Notre Dame qualified for 26 NCAA tournaments, including 24 in a row, and McGraw's teams captured two championship rings in 2001 and 2018.

Now after back-to-back disappointing seasons – 13-18 in McGraw’s final season and 10-10 last season in Ivey’s first after a season as an assistant coach with the NBA’s Memphis Grizzlies – Notre Dame is in unfamiliar territory. They are barely receiving votes in the preseason Associated Press Top 25, and they have been picked to finish sixth in the Atlantic Coast Conference race.

In short, they’ve gone from being a top dog to being an underdog. That’s just fine with Ivey and her team.

“I love the energy – it’s electric,” Ivey said of her team. “Everyone is committed and has worked so hard to come back. They are playing with a sense of urgency and a hunger. That’s from having a bad taste in their mouths and not being able to make the tournament. It will be our motivation.”

Ivey was an All-America point guard on the 2001 championship team and later an assistant to McGraw. She mentored the guards, including Arike Ogunbowale, who hit buzzer-beater shots at the Final Four against Connecticut and Mississippi State to win the program's last NCAA title.

“This year we’re flying under the radar,” said 6-foot-3 sophomore forward Maddy Westbeld, the ACC Rookie of the Year last year who averaged 15.2 points and 7.9 rebounds. “But people are going to know who we are.”

Senior guard Abby Prohaska, one of three players (juniors Anaya Peoples and Sam Brunelle are the others) who have played for both McGraw and Ivey.

Following the 82-81 loss to Baylor in the 2019 NCAA championship game, McGraw saw Ogunbowale and four other starters taken among the first 18 picks in the WNBA draft and lost two others to transfers. She retired after the following season.

Four players transferred after Ivey’s first season, but Ivey likes what she has returning.

Miles, who left Blair Academy early to play in the second semester last season, heads the newcomers who include 6-foot-3 grad-transfer Maya Dodson, who opted out of her senior season at Stanford, last year’s NCAA champion, but has rebounding and shot-blocking abilities; 6-5 sophomore forward Nat Marshall who sat out last season rehabbing a torn ACL; and 6-1 guard Sonia Citron, who averaged 13.3 points per game for the World Cup gold medal-winning U.S. under-19 team.

“We’re hoping to get a good mix of youth and experience,” Ivey said. “For us, it’s about chemistry and we developed a lot of that this summer by being together. I’m hoping that shows and transfers to the court.”

It’s also a benefit that McGraw, an ACC Network studio analyst, lives nearby and has watched practices and shared advice ahead of the season opener Nov. 9 at home against Ohio.

“I wanted her to watch practice and give me feedback,” Ivey said. “I honestly try to pick her brain as much as I can … and I got a lot of feedback.”

Did McGraw like what she saw? “She did,” Ivey said with a smile.

The underdogs soon may be barking again.