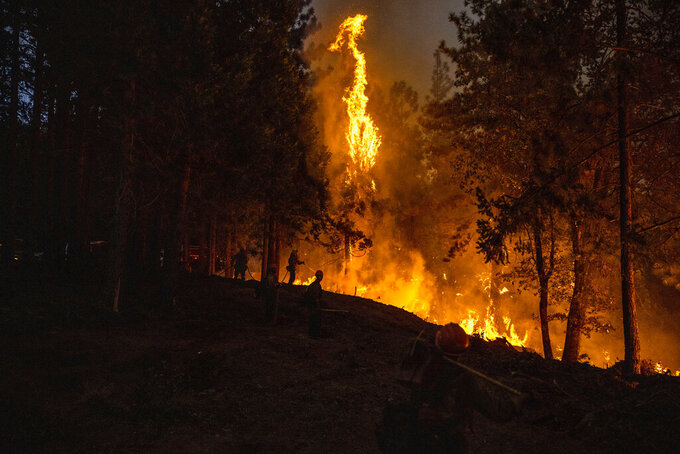 LOS ANGELES (AP) — Forces were beginning to collide in California on Thursday as wildfires threatened communities, an epic heat wave stressed the electrical grid and as moisture from a tropical storm was expected to bring thunderstorms and floods along with cooling.

Firefighters struggled to control major wildfires in Southern California and the Sierra Nevada that have grown explosively, forced extensive evacuations and produced smoke that could interfere with solar power production.

The Fairview Fire in Southern California covered about 37 square miles (95 square kilometers) of Riverside County and was just 5% contained. Two people died while fleeing flames on Monday and at least 11 structures have been destroyed. More than 18,000 homes were threatened by the fire fed by shifting winds, officials said.

In the Sierra, the Mosquito Fire burned out of control, scorching at least 11 square miles (28 square kilometers), forcing evacuations for some 2,500 residents in Placer and El Dorado counties, while blanketing the region in smoke.

Flames jumped the American River, burning structures in the mountain hamlet of Volcanoville and moving closer to the town of Foresthill, home to about 1,500 people. Fire spokesperson Chris Vestal called the fast-moving blaze an “extreme and critical fire threat.”

The Nevada Division of Environmental Protection warned the Reno area that air quality could be very unhealthy to hazardous due to smoke from the Mosquito Fire 100 miles (160 kilometer) away.

The fire's cause remained under investigation. Pacific Gas & Electric notified the state Public Utilities Commission that the U.S. Forest Service placed caution tape around the base of a PG&E transmission pole but that no damage could be seen. PG&E said unspecified “electrical activity” occurred close in time to the report of the fire on Sept. 6.

Another dangerous blaze burned in stands of timber near the Big Bear Lake resort region in the San Bernardino Mountains east of Los Angeles. It was just 2% contained after scorching nearly 2 square miles (5 square kilometers).

A surge of clouds and showers associated with Tropical Storm Kay off Mexico’s Baja California peninsula knocked the edge off temperatures in Southern California at times but also were a potential problem for solar generation. The storm was downgraded from a hurricane Thursday evening.

Despite the initial impacts of Kay, forecasters warned that the heat was not yet done.

“The seemingly endless heat wave that has been plaguing California will finally becoming to an end across at least Southern California, but not before two more very hot days and very warm nights,” the Los Angeles-area weather office wrote.

Operators of California’s power grid issued another “Flex Alert” call for voluntary cuts in use of electricity and expanded the period by two hours, 3 p.m. to 10 p.m.

Wildfire smoke and the cloud cover created uncertainty about solar power production in afternoon hours when temperatures rise toward their peaks, said Elliot Mainzer, president and CEO of the California Independent System Operator.

There was also uncertainty about wind power at the back end of the period.

Cal-ISO has issued Flex Alerts since last week and has avoided ordering rolling power outages, although a miscommunication with one Northern California provider led to blackouts.

With record demand on power supplies across the West, California snapped its record energy use around 5 p.m. Tuesday with 52,061 megawatts, far above the previous high of 50,270 megawatts set July 24, 2006.

An emergency appeal for conservation that was sent to Californians’ cellphones was credited with an immediate drop in demand on the electrical grid that evening.

Electrical demand hit 50,184 megawatts on Wednesday but it ended up being “a relatively quiet operation on the system,” Mainzer told a briefing.

The electrical load forecast for Thursday afternoon and evening was higher, however, and the uncertainty involving the renewable energy sources made the situation a bit more complex, he said.

“We certainly think we’re close to turning the corner, but we still have challenges ahead of us this evening,” Mainzer said.

Storm and wind conditions associated with the approaching hurricane were likely to create a new set of risks for power shortages in Southern California, he noted.

An Oregon utility said it will cut power to about 12,500 customers to the south and west of Portland just after midnight Friday in anticipation of strong, dry winds that pose a severe wildfire danger in the region. Another utility says about 30,000 additional customers could see their power cut as well in a bid to prevent fire from sagging or broken power lines.

Towns and cities across western Oregon and southwest Washington also imposed fire bans, including in the town of Seaside, where even beach bonfires were prohibited.

Forecasters warned of a chance of “rapid fire spread” but said winds were not expected to be as intense as those that hit on Labor Day weekend in 2020, fanning wildfires that burned more than 1 million acres, destroyed 4,000 homes and killed at least 11 people.