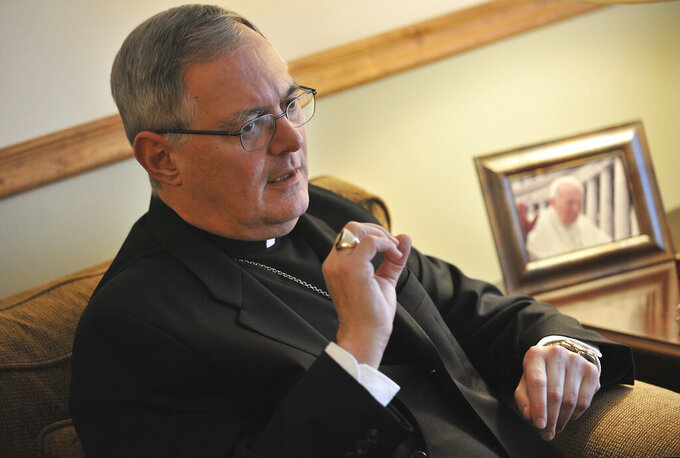 Tobin held a press conference Wednesday morning at the cathedral in Providence to announce the changes. He said the transition is meant to ensure his replacement is ready to go when he retires. The Most Reverend Richard G. Henning is the new coadjutor bishop of Providence with a right of succession.

When he does take over, Henning will replace a religious leader whose conservative stance on issues such as abortion and same-sex marriage had prompted backlash.

Tobin, a frequent critic of Francis who turns 75 on April 1, said he will submit his resignation as expected and that the timeline is up to the pope.

“The transition, I think, will happen pretty quickly,” Tobin said. “I hope my retirement is accepted in a timely manner… I’m guessing sometime this spring.”

The nomination of a coadjutor bishop can also be read as simply a smart administrative decision, to ease the transition from one bishop to the next.

“On this day, I am filled with gratitude. I am also filled with an awareness of my own limits and my need for God’s grace,” Henning said. “I will certainly ask the good people of this state and this wonderful Diocese to pray for me and to pray for our shared mission to live and to proclaim the grace and mercy of Jesus Christ.”

Before his new appointment, Henning served as auxiliary bishop of the Diocese of Rockville Centre since 2018. A Long Island native born in 1964, Henning earned degrees from St. John's University in New York and trained for the priesthood at the Seminary of the Immaculate Conception. He received a doctorate from the University of St. Thomas Aquinas in Rome and taught seminarians for more than a decade.

Tobin has been known for taking a hard line on church teachings, often getting involved in the sometimes heated debate among bishops as to whether President Joe Biden and other Catholic politicians who support abortion rights should receive Communion. Tobin urged Pope Francis to confront Biden over abortion last year.

“Please challenge President Biden on this critical issue,” Tobin tweeted before Biden and Francis met at the Vatican in October 2021. “His persistent support of abortion is an embarrassment for the Church and a scandal to the world.”

Biden said after the meeting that the pontiff told him he was a “good Catholic” and should keep receiving Communion.

In 2009, Tobin barred then-Rep. Patrick Kennedy from Communion because of the Democrat's support for abortion rights.

Rhode Island is one of the most heavily Catholic states. Tobin urged state lawmakers to drop legislation in 2013 that eventually passed to legalize gay marriage, which he called “immoral and unnecessary.”

Tobin sparked backlash in 2019 when he wrote a tweet to urge Roman Catholics to not support or attend LGBTQ Pride Month events. He had returned to Twitter after briefly deleting his account in 2018, calling it a major distraction, an obstacle to his spiritual life and an “occasion of sin” for himself and others.

In 2014, Francis was working on new policies for how the church can more compassionately minister to Catholic families. Tobin said, “Pope Francis is fond of ‘creating a mess.’ Mission accomplished.” The diocese said Tobin was playing off the pope’s comments at World Youth Day in Rio, where he urged them to shake up the church and “make a mess.”

Though when Francis was selected as the new pope in 2013, Tobin called him a “wonderful new shepherd" of the Catholic Church.

Tobin was installed as the eighth bishop of the Providence Diocese on May 31, 2005. According to his biography, he often states that he was “not ordained to be irrelevant."

"I don’t want to be a lame duck forever. I’d rather be a dead duck I guess,” Tobin said, sparking laughter at the press conference.