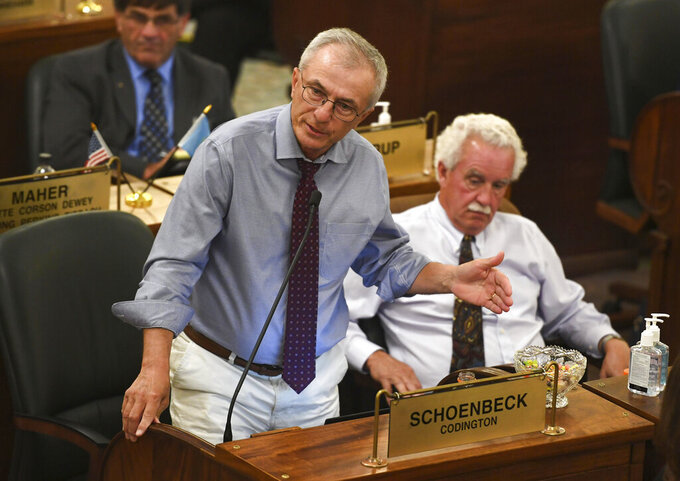 Erin Woodiel, ASSOCIATED PRESS
FILE - South Dakota state Sen. Lee Schoenbeck asks a question of the defense during the impeachment trial of Attorney General Jason Ravnsborg on June 21, 2022, at the South Dakota state Capitol in Pierre, S.D. South Dakota lawmakers can adorn their office with a crucifix, but they cannot pound the nail into the state Capitol's wall, a legislative oversight board clarified on Tuesday, Dec. 6, as part of a policy regulating how religious symbols can mark the state's seat of government. (Erin Woodiel/The Argus Leader via AP, File)

SIOUX FALLS, S.D. (AP) — South Dakota lawmakers can adorn their office with a crucifix, but they can't pound the nail into the state Capitol's wall, a legislative oversight board clarified on Tuesday as part of a policy regulating how religious symbols can mark the state's seat of government.

The Legislature's Executive Board took up the issue after two Republican lawmakers stained five chairs in a Capitol meeting room with oil as they marked chairs with crosses ahead of a meeting last month to elect caucus leaders. It took the Capitol's groundskeepers about three hours to clean, but five chairs were left slightly discolored.

The executive board appeared content with the lawmakers, who were not named, covering the $79.80 in wages for the time spent cleaning the chairs. At least one offender expressed regret at the decision to mark the chairs, said Republican state Sen. Lee Schoenbeck, who chairs the executive board.

But the episode — which came alongside a rift in the Republican caucus between moderates and a right-wing — also raised questions about who had access to the Statehouse rooms where laws are formed and to what degree lawmakers, often compelled by their Christian convictions, can leave a mark in the Capitol.

Republican state Rep. Sue Peterson told The Dakota Scout that she marked chairs with oil crosses as an act of prayer before last month's Republican caucus meeting. She said many lawmakers often pray as they craft state laws.

Schoenbeck proposed a policy that instructs lawmakers they “may not mark on or damage in any fashion the real or personal property of the Citizens’ Capitol." And if they want to “modify” their workspaces, they have to make a request to the state agency that maintains the building.

“There’s a crucifix in my office, and I’m not the one who pounds the nail in the Capitol to hang it,” Schoenbeck said, giving an example of how lawmakers should walk the line between allowing religious expression while respecting the century-old building.

Lawmakers have long been comfortable with an atmosphere imbued with Christianity. They bow their heads in prayer before starting each session, dozens show up to the Capitol with their foreheads marked by crosses on Ash Wednesday and the Bible is sometimes invoked during bill debates.

But Schoenbeck also said it was important to clarify how First Amendment rights are respected on government property. He said if one religious group is given space for expression, any other group needs to be granted access as well.

The board's policy establishes a process by which legislators and citizens can request to use one of the Capitol's meeting rooms if it complies with the Legislature's work and policies. Citizens would need to make a $500 deposit.

Schoenbeck said he hopes people will pause to think about the history of the building: “People don’t step back and think about, we’re just passing through this place.”