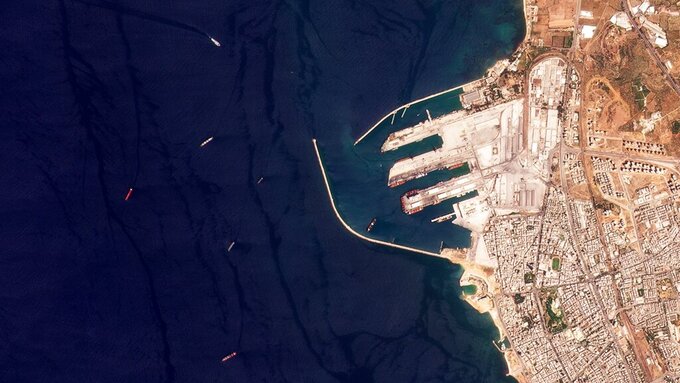 Planet Labs PBC, ASSOCIATED PRESS
This satellite image from Planet Labs PBC shows the Russian-flagged cargo ship SV Konstantin, the red vessel the furtherest left, off the port in Tartus, Syria, Wednesday, Aug. 17, 2022. The Konstantin, that Ukraine alleges holds stolen grain from territory seized by Moscow amid the war there, appears to have reached the Syrian port of Tartus, satellite images analyzed Thursday by The Associated Press show. (Planet Labs PBC via AP)

DUBAI, United Arab Emirates (AP) — A Russian cargo ship that Ukraine alleges holds stolen wheat from territory seized by Moscow appears to have reached the Syrian port of Tartus, according to satellite images analyzed Thursday by The Associated Press.

The arrival of the SV Konstantin marks just the latest shipment of Ukrainian grain — whether legally purchased or allegedly looted — to reach Syria. Another vessel, the Razoni, recently docked full of legally purchased Ukrainian corn as part of a United Nations-led effort to get the country's food out of the war zone to a hungry world.

The Konstantin's arrival also shows the level Damascus has relied on Russia to keep Syria's embattled President Bashar Assad in power amid his own nation's yearslong war, particularly at this Mediterranean Sea port that hosts Russian warships and has crucial Russian-run grain silos.

The Konstantin traveled from the Russian-occupied Crimean Peninsula in the Black Sea from around July 6, according to ship-tracking data from MarineTraffic.com analyzed by the AP.

The ship had loaded Ukrainian wheat at Sevastopol, the Ukrainian Embassy in Lebanon said in a statement to the AP on Thursday. That port city in Crimea has seen Russian forces previously bring grain by truck from occupied territories, Ukrainian officials say.

The Konstantin traveled through the Bosphorus and reached the Turkish city of Izmir on the Aegean Sea. The ship then headed further into the Mediterranean along the coast of Cyprus before switching off its Automatic Identification System tracker on Sunday. Ships are supposed to keep their AIS trackers on, but vessels wanting to hide their movements often turn theirs off. Those heading to Syrian ports routinely do so.

Satellite images from Planet Labs PBC analyzed by the AP show the Konstantin off the coast of Tartus on Tuesday and Wednesday. The vessel's length, width and appearance resembles previous Planet Labs images of the ship taken at a time corresponding to when its AIS tracker was still on north of Cyprus.

Yoruk Isik, a non-resident scholar at the Washington-based Middle East Institute who monitors shipping through the Bosphorus, has been tracking the Konstantin. He and other open-source intelligence analysts first said they believed the vessel to be off Tartus as well, based on the satellite photos.

After being contacted by the AP, the Ukrainian Embassy in Lebanon similarly said that it believed the Konstantin had arrived to Syria after earlier claiming it would head to Tripoli, Lebanon.

“Onboard of this ship there are grains that were plundered and illegally transported by the Russian occupation authorities from the storage facilities located on temporarily occupied territories in Zaporizhzhya, Kherson and Mykolaiv,” the embassy said.

Officials at Tartus port could not be reached for comment. Syria’s mission to the United Nations did not respond to a request for comment.

Syria remains sanctioned by the West over killing and abuses of civilians during the civil war, though food supplies have been exempted by the West. Already in May, satellite images showed the Russian-flagged Matros Pozynich at dockside in Latakia, Syria. Ukraine said the ship had 27,000 tons of grain Russia stolen from it and initially tried to sell to Egypt, which refused to take the cargo.

Tartus, on the Mediterranean Sea, lies about 320 kilometers (200 miles) northwest of Syria’s capital, Damascus. Russia's Soviet-era naval base there is Moscow's only such facility outside the former Soviet Union.

In 2017, Moscow struck a deal with Assad’s government to extend its lease on Tartus for 49 years. The agreement allows Russia to keep up to 11 warships there, including nuclear-powered ones. Satellite photos this week showed at least two Russian submarines and other warships at the port.

Russian firm Stroytransgaz, owned by billionaire oligarch Gennady Timchenko through his investment firm Volga Group, runs the port. Timchenko, who is close to Russian President Vladimir Putin, is sanctioned by the European Union and the U.S. Stroytransgaz did not respond to a request for comment.