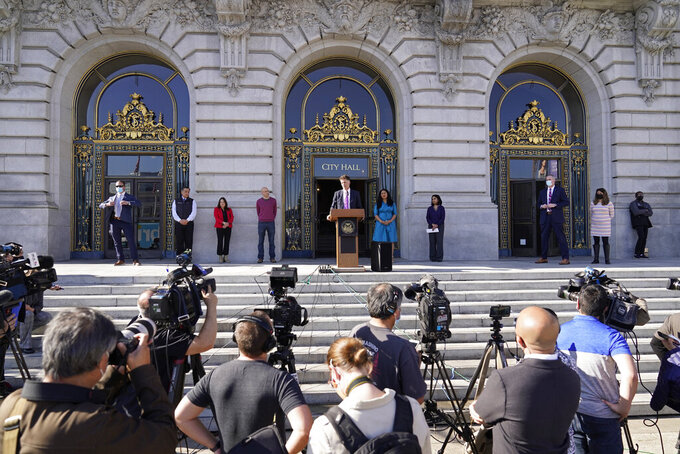 Eric Risberg, ASSOCIATED PRESS
San Francisco health director Dr. Grant Colfax talks about the first confirmed case of the omicron variant as Mayor London Breed, right of podium, listens during a COVID-19 briefing outside City Hall in San Francisco, Wednesday, Dec. 1, 2021. The U.S. recorded its first confirmed case of the omicron variant Wednesday — a person in California who had been to South Africa. Genomic sequencing on the patient's virus was conducted at the University of California, San Francisco. (AP Photo/Eric Risberg)

SACRAMENTO, Calif. (AP) — Confirmation of the first U.S. case of the omicron variant in California was not surprising and shouldn't force another shutdown heading into the holidays, Gov. Gavin Newsom said Wednesday.

State health officials said they are increasing COVID-19 testing at California's airports for arrivals from countries identified by the U.S. Centers for Disease Control and Prevention as being areas where the newly identified variant is spreading. But otherwise Newsom said he does not anticipate that the most populous state will impose another stay-at-home order or other new restrictions.

“Look, I’m confident if we continue to do what we’ve done, which is continue to be in the top 10 in terms of the lowest case rates and on the highest vaccination rates, on the lowest positivity rate, that won’t be an issue,” he said during a visit to Merced County in the Central Valley to promote vaccinations and booster shots.

Newsom imposed the nation's first statewide stay-home order in March 2020. In September, he handily defeated an effort to recall him that was spurred by frustration with his restrictions designed to slow the virus's spread.

The person returned on Nov. 22, developed mild symptoms and tested positive for COVID-19 on Monday. Researchers at the University of California, San Francisco obtained a sample from the patient Tuesday evening and worked overnight to identify the variant through genetic sequencing.

State and local health officials refused to provide many details about the person, citing privacy concerns, but Newsom said the person is between the ages of 18 and 49. The patient, who developed minor symptoms and wasn't hospitalized, was fully vaccinated but hadn't gotten a booster because the last shot was too recent, Newsom said.

California’s health secretary, Dr. Mark Ghaly, said the fact the infected individual was vaccinated might cause some to question the vaccines' effectiveness, particularly against the recently discovered variant.

“We’ve been talking for months about the fact that vaccinations do one really, really important thing: protect against severe disease, against hospitalization and death," he said. "And the evidence that an individual with omicron ... actually has mild symptoms, is improving, is a testimony to the importance of the vaccinations.”

Ghaly said people can expect to see more cases in California. “That’s why we need to keep our guard up,” he said.

State health officials urged people to continue with the same precautions they have been promoting all along: Get the vaccine and a booster shot; wear masks indoors in public; get tested if symptoms develop; and stay home if feeling sick.

California experienced its worst surge of cases during last year's holiday season. Cases most recently spiked in late summer and then fell swiftly until largely plateauing. About 3,200 people are hospitalized, less than half than three months ago.