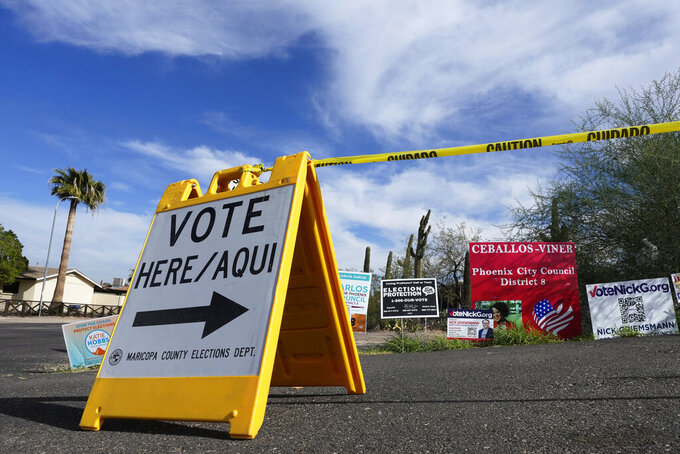 PHOENIX (AP) — Arizona voters rejected one of three ballot measures that would take away some of their rights to pass their own laws and also approved the only two citizen initiatives that were up for a vote in the election that concluded on Tuesday.

The other seven measures were placed on the ballot by the Legislature and remained too early to call late Tuesday.

Voters overwhelmingly approved Proposition 211, a citizen initiative designed to shine a light on so-called dark money that anonymous donors funnel through campaigns or organizations to support or attack candidates or ballot measures. Former Democratic Attorney General Terry Goddard is among those who have pushed for the change for years. It requires any organization spending more than $5,000 to identify all donors, with big penalties for failing to do so.

Voters also approved Proposition 209, a measure backed by the union-supported progressive group Healthcare Rising Arizona. It raises the amount of assets shielded from bill collectors, limits interest rates on medical debts and increases the amount of cash that can be kept from $300 to $5,000.

Voters rejected one of the three referendums placed on the ballot by Republican state lawmakers that would limit the citizen's initiative process. The defeated measure would have allowed the Legislature to make changes to voter-approved laws if one part of it was declared to be illegal. Two others changing the initiative process remained too early to call.

The measures that still are to be decided include one boosting the identification needed for both mail-in and in-person voting and a question on whether young immigrants should qualify for in-state tuition.

Others include a statewide sales tax to fund rural fire districts and a measure that would allow business property taxes to be cut.

The two citizen initiatives made the ballot despite legal challenges to their qualifying signatures.

Proposition 209 is the voting measure. If approved, it would require people who mail in ballots to provide additional identification on top of their signature on the ballot envelope. The referendum also changes how in-person voters are allowed to prove their identity by eliminating the ability to show a non-picture ID along with a utility bill, for instance. In all cases, voters already must prove their identify and citizenship when registering to vote.

The three measures targeting initiatives were placed on the ballot by Republican lawmakers who openly oppose the process that allows voters to bypass the Legislature to pass laws. Recent examples include boosting the minimum wage and legalizing marijuana.

Proposition 128 would free the Legislature from the Voter Protection Act's ban on changing laws passed by initiative if any part of the measure is found by the state Supreme Court or U.S. Supreme Court to contain illegal or unconstitutional language. Currently, only that portion would be stricken, but if the referendum passes lawmakers could make wholesale changes or even repeal such laws.

Proposition 129 would limit initiatives to a single subject and require that all major parts of an initiative be explained in the title, and Proposition 132 would raise the threshold from a simple majority to 60% of the vote to pass any ballot measure that imposes a fee or raises tax.

At least two ballot measures this year — one that would raise taxes for rural fire districts and another that would limit interest and make other changes to debt owed by Arizonans — would need 60% of voter support to pass under terms of the proposal.

The rest of the measures also were put on the ballot by the Legislature:

Proposition 310 boosts the sales tax by 1/10 of a cent statewide to fund rural fire districts. Backers say local property taxes in areas outside of bigger cities that can fund their own fire services fall short of what's needed for a modern department.

Proposition 131 creates a lieutenant governor who would run on a slate with each party's candidate for governor. They would be next in line if the governor leaves office for any reason and would oversee the department of administration, which handles state contracts, hiring and firing.

Proposition 308 would allow immigrants who went to high school in the state for two years to get in-state college tuition regardless of their immigration status. Aimed at so-called Dreamers, the measure has broad backing from the business community. At least 18 states have similar rules on in-state tuition for young people.

Proposition 130 restores a property tax exemption for disabled veterans that was ruled unconstitutional and exempts some business personal property and stocks of raw materials from property tax.