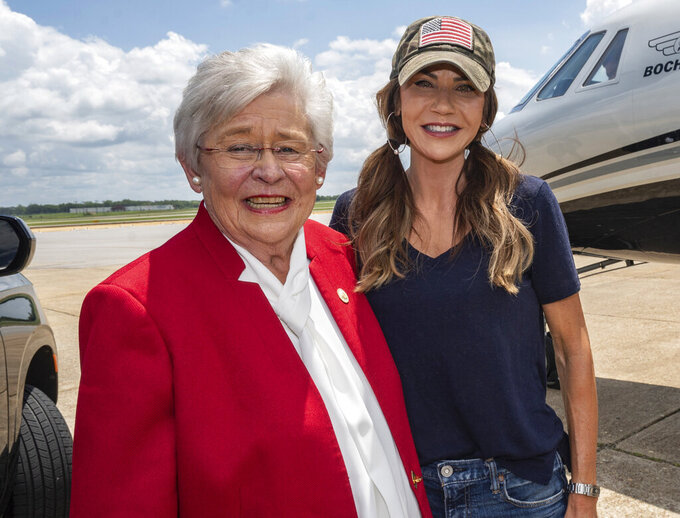 Hal Yeager, ASSOCIATED PRESS
In this photo provided by Alabama Governor's Office, Alabama Gov. Kay Ivey, left, is shown greeting South Dakota Gov. Kristi Noem at the airport in Montgomery, Ala., on Friday, Aug. 12, 2022. Ivey's office released photos of Ivey and and Noem a day after it dismissed rumors that Ivey was having health issues just months ahead of the general election. (Alabama Governor's Office via AP)

MONTGOMERY, Ala. (AP) — Alabama Gov. Kay Ivey's office released photos of her greeting South Dakota Gov. Kristi Noem at an airport on Friday a day after it dismissed rumors that Ivey was having health issues just months ahead of the general election.

The four photos showed Ivey, 77, with Noem beside a small jet that landed at the regional airport in Montgomery, where Noem was among the speakers scheduled to address an Alabama Republican Party fundraising dinner.

Ivey was last seen in public on Aug. 2 at a groundbreaking ceremony. On Thursday, Ivey’s office said she remained “healthy and cancer-free” as it knocked down rumors that she was having medical problems.

Still, the governor's office did not respond to questions asking about Ivey’s upcoming schedule, her whereabouts this week and whether she had been in the hospital in the past four weeks.

Ivey, who easily won the GOP gubernatorial nomination without a runoff in May, announced in 2019 that she had been diagnosed with early stage lung cancer and would undergo radiation treatments. In 2020, she said the cancer appeared to be gone and that her doctor considered her free of the disease.

Ivey is a heavy favorite over Democratic gubernatorial nominee Yolanda Flowers in the November general election.