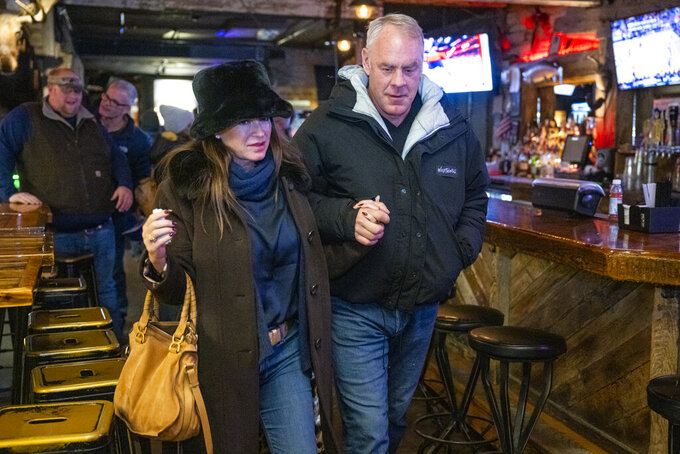 Voters delivered two consolation prizes to Democrats with the rejection of an abortion-related referendum and the defeat of a Republican loyalist seeking election to Montana’s nonpartisan Supreme Court. The judicial contest drew a deluge of cash from conservative groups and trial lawyers.

But the election that concluded Tuesday left political power firmly in the GOP's grasp: A potential supermajority at the state Legislature could enable the party to propose referenda to amend the Montana Constitution.

The Congressional race results extend a string of bitter Democratic losses in the Treasure State. The party has not won a House race since 1994, and more recently lost the governor’s mansion and a U.S. Senate seat. The sole Democrat remaining in statewide elected office is U.S. Sen. Jon Tester, who faces reelection in 2024.

Rosendale, Zinke and other Republicans followed the same playbook used in past elections, tying their opponents to national Democrats such as President Joe Biden and House Speaker Nancy Pelosi, while also tapping into voter anxiety over crime and the troubled economy.

Zinke, who served previously in the House from 2015 to 2017, overcame early stumbles including a razor-thin victory in the primary and revelations in recent months that he had lied to federal officials during ethics investigations into his tenure in former President Donald Trump's Cabinet.

Democratic challenger Monica Tranel, an environmental and consumer rights attorney from Missoula, had tried to capitalize on the scandals by characterizing him as a “snake."

Celebrating his victory on Thursday, Zinke remarked that “Montana saw through the lies," with voters instead responding to his calls to curb energy costs, restrict abortions with some exceptions, reform the tax code and address housing shortages.

With the GOP poised to potentially take the majority in the House, Zinke said Republicans “have to deliver."

“One key promise is we have to assert the power of the purse," he said. "We’ve got to show we can control the budget. Right now the budget is out of control.”

Tranel continued to attack Zinke during an appearance Thursday before supporters at the University of Montana in which she also thanked those who voted for her.

Libertarian John Lamb, an anti-government extremist and organic farmer, finished third. Outside groups including one linked to Democrats, promoted Lamb’s candidacy in an attempt to peel votes away from Zinke.

Montana will have two House members in 2023 for the first time in 30 years due to its growing population.

Republicans had a huge financial edge in both House races: Zinke raised and spent about $6 million — more than twice as much as Tranel — while Rosendale outspent his opponents and still had more than $1 million in cash as of Oct. 19, according to federal campaign filings.

Elections of justices are supposed to be nonpartisan. However, the Gustafson race drew huge sums of cash as Republicans backed Brown and tried to push the court in a more conservative direction, while Democrats hoped to maintain its liberal majority to prevent the erosion of abortion rights in Montana. Brown was previously elected as a Republican to the state Public Service Commission.

Gustafson's campaign was boosted by support from the political arm of the Montana Trial Lawyers Association, which spent more than $1.3 million on the race. The Republican State Leadership Committee reported spending nearly $700,000 on ads supporting Brown, who has never been a judge and said he was asked to run by Gov. Greg Gianforte.

“I am heartened to know that Montana voters are courageous and bold enough to stand up for our democracy and reject my opponent and his supporters’ inappropriate attempt to politicize our judiciary,” Gustafson said.

Brown said in a statement that his campaign was outspent by special interest groups and “liberal money” that flooded the state in the race's final weeks.

The defeated abortion referendum has raised the prospect of criminal charges for health care providers unless they take “all medically appropriate and reasonable actions to preserve the life” of an infant born alive, including after an attempted abortion.

Health care workers and other opponents argued that the measure could rob parents of precious time with infants born with incurable medical issues if doctors are forced to attempt treatment.