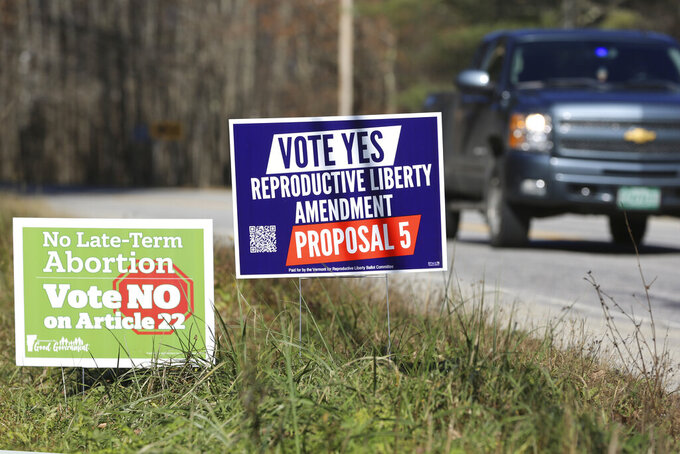 Wilson Ring, ASSOCIATED PRESS
A pick up truck drives by campaign signs opposing and supporting a proposed amendment to the Vermont constitution that would guarantee access to reproductive rights, including abortion, by the side of the road in on Thursday, Nov. 3, 2022 in Middlesex, Vt. Supporters say the amendment is needed to ensure people have access to all reproductive rights. Opponents say the wording of the proposal is vague and it could lead to unintended consequences. Voters will decide on Tuesday, Nov. 8. (AP Photo/Wilson Ring)

Voters in Vermont on Tuesday approved a constitutional amendment to protect reproductive rights in the state, including abortion.

“Here in Vermont, voters took responsibility to protect care wherever possible. With Roe v. Wade being overturned, state-level protections are vital to safeguarding access to reproductive health care, and Vermont has set an example of what is possible,” Vermont’s Reproductive Liberty Ballot Committee said in a statement.

“We are grateful to Vermont voters for their overwhelming support of these fundamental human rights.”

Other states were also considering measures to regulate reproductive health after the U.S. Supreme Court in June struck down Roe v. Wade, the 1973 ruling that legalized abortion.

In 2019, the Democrat-controlled Vermont Legislature passed a law guaranteeing abortion rights, and the state began the process of amending the constitution. The proposal had to be passed by two consecutively elected legislatures. The final step was the statewide referendum on Tuesday.

Republican Gov. Phil Scott gave formal notice in July that state voters would be casting ballots on the measure on Election Day.

“In Vermont, we solidified the right to choose in law, and now Vermonters have the opportunity to further protect that right in our constitution,” Scott said in a statement at the time. “It is more important than ever to make sure the women in our state have the right to make their own decisions about their health, bodies, and their futures.”

The constitutional amendment does not contain the word “abortion.”

Supporters say that’s because it is intended not only to authorize abortion but to guarantee reproductive rights such as the right to get pregnant or have access to birth control.

Opponents said the wording is vague and could have unintended consequences. Among concerns that critics raised is that the amendment would protect late-term abortions, which are very rare.

“By putting our existing law into the Constitution, given that we have never regulated viable infant abortions in any way, it would permanently lock us out of regulating that, and there’s some significant concerns about that,” said Republican Rep. Anne Donahue.

Mary Hahn Beerworth, executive director of Vermont Right to Life Committee, said the organization encouraged lawmakers to be more specific about the language.

“If they’re going to say it’s about abortion then it should say abortion. And it doesn’t and it doesn’t say woman,” she said.

But Rep. Ann Pugh, a Democrat, said the amendment’s language is clear and is based on “a bundle of rights” that came from U.S. Supreme Court cases before and after Roe v Wade.

“It will not change, it will not expand anything about the way abortion has been safely provided in Vermont since the early 1970s,” Pugh said. “These are medical decisions which are guided by the individual, their healthcare provider and by strict medical ethics.”