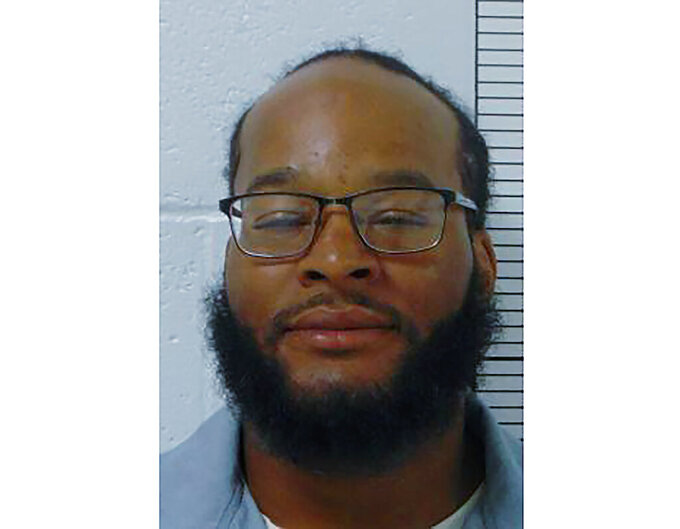 Uncredited, ASSOCIATED PRESS
This photo provided by the Missouri Department of Corrections shows Kevin Johnson. The Missouri man sentenced to death for killing a police officer in a fit of rage over his brother's death is asking the U.S. Supreme Court to halt the execution planned for later this month, in part because the man was a teenager at the time of the killing. (Missouri Department of Corrections via AP)

A Missouri man sentenced to death for killing a police officer in a fit of rage over his brother's death is asking the U.S. Supreme Court to halt the execution planned for later this month, in part because the man was a teenager at the time of the killing.

Kevin Johnson is scheduled to die by injection Nov. 29 at the state prison in Bonne Terre, Missouri. Johnson, now 37, killed Kirkwood, Missouri, Police Officer William McEntee in 2005. It would be just the 14th execution in the U.S., but the first of three planned in Missouri in upcoming months. The other two in Missouri are set for early 2023.

Johnson's lawyer cites concerns about racial bias. The court petition states that if not for racial comments by two white jurors at his trial, Johnson, who is Black, could have been convicted of second-degree murder instead of first-degree, and been spared the death penalty.

The petition also cited Johnson's age. He was 19 at the time of the killing.

"A late adolescent of 18 to 20 years has the intellectual maturity of an adult but the emotional maturity and response inhibition of a younger teenager," the court filing states. “Those limitations are all the more important in Johnson’s case. Johnson has a history of psychiatric hospitalization, a suicide attempt at the age of 14, a major depressive disorder, and auditory hallucinations.”

The Supreme Court in 2005 banned the execution of offenders who were younger than 18 when they commited crimes. While that didn't directly apply to Johnson's case, local courts have increasingly moved away from sentencing teen offenders to death. Johnson's petition states that nationally, death sentences for those ages 18-20 at the time of the crime were imposed just once in 2018, twice in 2019, and not at all in 2020 or 2021.

McEntee, a husband and father of three, was among the police officers sent to Johnson's home on July 5, 2005, to serve a warrant for his arrest. Johnson was on probation for assaulting his girlfriend, and police believed he had violated probation.

Johnson saw officers arrive and awoke his 12-year-old brother, Joseph “Bam Bam” Long, who ran next door to their grandmother’s house. Once there, the boy — who suffered from a congenital heart defect — collapsed and began having a seizure.

Johnson testified at trial that McEntee kept his mother from entering the house to aid Bam Bam, who died a short time later at a hospital.

In an interview earlier this month with St. Louis Public Radio, Johnson recalled kicking his bedroom door off its hinges and then roaming the neighborhood angry at McEntee for holding back his mom as Bam Bam convulsed, screaming “He killed my brother!”

Later that evening, McEntee returned to the neighborhood to check on unrelated reports of fireworks being shot off. That’s when he encountered Johnson.

Johnson pulled a gun and shot the officer, killing him.

In the interview with St. Louis Public Radio, Johnson took responsibility for the killing.

“I think as humans, we tend to shift the blame,” Johnson said. “I don’t think (McEntee) did anything that was wrong that day that I can even blame him for.”

The Missouri Supreme Court also has set execution dates of Jan. 3 for Scott McLaughlin, and Feb. 7 for Leonard Taylor.

McLaughlin was convicted of killing 45-year-old Beverly Guenther in 2003. She was raped and stabbed to death outside of her workplace in St. Louis County.