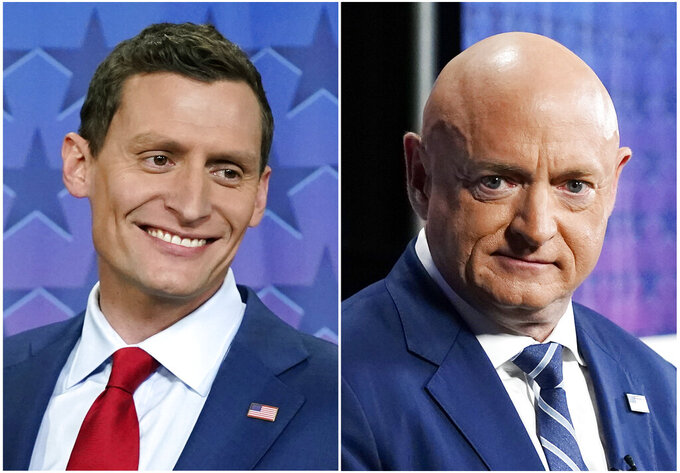 PHOENIX (AP) — Arizona Sen. Mark Kelly has been fighting to hold on to the seat he won for Democrats two years ago, but he faced a vastly different political environment heading into Tuesday's election against Republican venture capitalist Blake Masters.

Kelly took the lead in early returns, which reflected mail ballots returned ahead of election day, but the margin was expected to narrow as more GOP-leaning ballots cast on Election Day were counted.

Kelly's 2020 special election victory gave Democrats both of Arizona's Senate seats for the first time in 70 years. It was propelled by the state's fast-changing demographics and the unpopularity of then-President Donald Trump.

This time, the unpopular president, Joe Biden, is from Kelly's own party, and the environment looks less favorable for Democrats.

The Arizona race is one of a handful of contests that Republicans targeted in their bid to take control of what is now a 50-50 Senate. It's a test of the inroads that Kelly and other Democrats have made in a state once reliably dominated by Republicans and will offer clues about whether Democratic success here was an aberration during the Trump presidency or an enduring phenomenon.

Kelly thanked his family and supporters gathered in Tucson and said he was confident he would prevail once all ballots are counted.

“It's been the honor of my life to represent Arizona in the United States Senate," Kelly said. “And for as long as I'm there, I’ll be honest with you, I will protect our country and our democracy.”

Kelly has distanced himself from Biden, particularly on border security, and plays down his Democratic affiliation. Masters emerged bruised from the contentious Republican primary and struggled to raise money, but polls suggest the race is nonetheless close.

Kelly's political identity as been defined by two pieces of his biography. He flew in space four times as a NASA astronaut. And he's married to former U.S. Rep. Gabby Giffords, who inspired the nation with her recovery from a gunshot wound to the head. The shooting during a 2011 constituent event in Tucson killed six people and injured 13. Kelly and Giffords went on to co-found a gun control advocacy group.

Kelly’s campaign has largely focused on his support for abortion rights, protecting Social Security, lowering drug prices and ensuring a stable water supply in the midst of a drought, which has curtailed Arizona’s cut of Colorado River water.

He’s styled himself as an independent willing to buck his party, in the style of Republican U.S. Sen. John McCain, whose death led to the special election that Kelly won in 2020.

Masters has tried to penetrate Kelly’s independent image, aligning him with Biden's failure to secure the U.S.-Mexico border and tamp down on rampant inflation.

“Mark Kelly is no John McCain. He’s not even a Kyrsten Sinema," Masters said at a campaign event last month, referring to Arizona's senior senator known for political fights with her fellow Democrats. “He's a rubber stamp vote for Joe Biden’s agenda.”

Nearly half of Arizona voters say the economy is the most important issue facing the country, according to AP VoteCast, an expansive survey of more than 3,200 voters in Arizona. And nearly all voters said inflation was a factor in their votes, with about half saying it was the single most important factor.

Nearly 6 in 10 voters say Biden’s policies are more to blame for inflation than are factors outside of Biden’s control.

Almost two-thirds of voters say they are confident they can keep up with their expenses. Of that group, about half supported Kelly. Among voters who are not confident about meeting their expenses, about half backed Republican Senate candidate Blake Masters.

Masters won Trump's endorsement after claiming “Trump won in 2020.” Under pressure during a debate last month, he acknowledged he hasn't seen evidence the election was rigged, but later doubled down on the false claim that Trump won.

Masters, 36, worked for most of his adult life for billionaire tech investor Peter Thiel, who bankrolled Masters' primary run but was stingier during the general election. Masters endeared himself to many GOP primary voters with his penchant for provocation and contrarian thinking. But since then, he has struggled to redefine his image for the more moderate swing voters who will decide Tuesday's election.

During the primary, Masters called for privatizing Social Security, took a hard-line stance against abortion and promoted a racist theory popular with white nationalists that Democrats are seeking to use immigration to replace white people in America.

Masters later scrubbed some controversial positions from his website.

For about two-thirds of Arizona voters, the U.S. Supreme Court’s overturning of Roe v. Wade, the ruling that recognized a constitutional right to abortion, was an important factor, according to AP VoteCast. Those voters overwhelmingly favored Hobbs over Lake and Kelly over Masters.

A slight majority of voters approve of outgoing Gov. Doug Ducey’s decision to send migrants seeking asylum in the U.S. to northern Democratic states. A large majority — almost 8 out of 10 — favor increasing law enforcement presence at the U.S.-Mexico border.

In a state that has been a center of baseless allegations of election fraud, 9 in 10 voters say the future of democracy in the U.S. was a factor in their voting decisions. Among these voters, more favored Kelly than Masters.

Roughly 4 in 10 named the future of democracy in America as the single most important factor in the election.

Latino or Hispanic voters made up roughly 2 in 10 Arizona voters, according to the survey. They are more likely to favor Kelly over Masters.

Roughly one-fifth of Kelly’s supporters are Latino or Hispanic; slightly more than 1 in 10 of Masters’ backers are.

An earlier version of this report had an incorrect spelling of Sen. Kyrsten Sinema’s first name.